Guardiola: City will be ‘destroyed’ if they fail to win league

‘I know we will be judged, we have to win,’ says manager ahead of final clash at Brighton 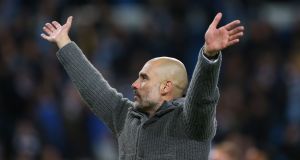 Pep Guardiola believes Manchester City will be “destroyed” if they do not become Premier League champions on Sunday. City will retain the title if they win at Brighton or match Liverpool’s result at home to Wolves.

Guardiola’s side have accumulated 195 points in 75 league matches since the start of last season. Yet despite this stellar return City could end up with only one championship. The manager acknowledged this and how his team can expect fierce criticism if they fall at the final hurdle, pointing to the reaction to Ajax’s and Barcelona’s Champions League exits this week.

“I’m not going to change my opinion on what we have done,” he said. “But of course, to get more credit, you have to win. We saw in the Champions League, when you are out, everybody destroyed the teams, destroyed the managers, destroyed clubs, [even though] they are doing well. We know the life in which we live. I know we will be judged. We have to win.

“First of all it’s a dream to be here. I didn’t expect it when we were seven points behind against this Liverpool to be in the position we are now. So that’s why it’s a dream come true. We’ve shown many things but now is not the moment to say how well we’ve done. We have the chance to be champions if we win our game and that’s what we have to do.

“If we make it back-to-back [titles] it would be nice but nothing is going to change too much. The fact we have done incredibly well all season in all competitions and now have two games – two finals [including the FA Cup] – for two titles, we have to be strong mentally knowing it’s going to be tough.

“We must play well, knowing it will be tough. It’s about how we react even if we have bad moments and try to make a good game. Focus on the game – how we want to play – and not worry too much. If the game is running into problems, be calm and think about what you have to do. You may have to go crazy in the last five, 10, 15 minutes but before that we have a plan and follow the plan to win the game – what we have done all season.”

Guardiola is content with the mood of his squad this week. “They are completely focused. We have spoken in the meetings and on the pitch. It’s a game where anything can happen: one mistake from our side, one incredible performance from the other side, a mistake from the referee for or against us can decide the title. That’s why we have to be more precise or good in all aspects we’ve been working on in these last three years and try to be better and win.”

Guardiola may have Kevin De Bruyne available, the midfielder having trained the past two days after a hamstring problem, though Fernandinho remains out.

City have won three of their past four matches 1-0, the other being a 2-0 victory over Manchester United, with Phil Foden’s fifth-minute strike against Tottenham the only early goal in this sequence.

Asked how important an early goal will be at the Amex Stadium, Guardiola said: “It would be nice to score and early but maybe it’s not going to happen. We’ve analysed Brighton and know how well they defend. Tottenham won last minute against them with a fantastic goal from [Christian] Eriksen; the last game they drew with Arsenal.

“I know it was difficult for us in the FA cup semi-final against them. But we just focus on the game we have to play, that’s the most important thing. Heads up on the job and see what we have to do to beat them.”

Guardiola is planning for Chris Hughton’s side to play defensively or otherwise. “We talk about the two options. The first – if they play like they did recently, so defensively, using set pieces, using long balls, using the counterattack with [Anthony] Knockaert, the buildup with the two central defenders who are so good,” he said. “But maybe at home in the last game they decide to go more forward. We have talked about what we can expect and how we handle both situations.”

Guardiola will not actively monitor Liverpool’s score. “Honestly, it’s better to focus on what we have to do. If we win we don’t have to look at anything else. Why should you be distracted by other situations? If they win we have to win, so both games will be difficult.”

In De Bruyne’s absence Bernardo Silva has emerged as one of City’s best performers. Guardiola believes the Portuguese should have claimed the Professional Footballers’ Association and Football Writers’ Association player of the year awards.

“He was the best, not just in our team. But I don’t vote. Bernardo can play incredibly well here, everywhere. Give me one team, he will play well there by far. So clever, so smart, nice guy, he does everything well.”