Liverpool ready for West Ham with an eye still on Europe 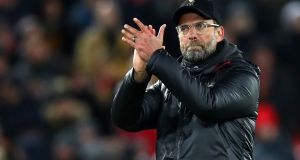 Liverpool manager Jurgen Klopp: “We will be ready for the Champions League and a very, very tough game.” Photograph: Clive Brunskill/Getty Images

Jürgen Klopp has said Liverpool will attack the Premier League and Champions League with the same intensity this month as the pursuit of a first league title for 29 years will not divert focus from the season’s other main goal.

The Premier League leaders can restore a five-point gap over Manchester City when they visit struggling West Ham on Monday night. Their quest for a sixth European Cup then resumes on February 19th when Bayern Munich visit Anfield in the last 16.

Early elimination from both domestic cup competitions has eased Liverpool’s schedule for the run-in, not that their manager wished it that way, but Klopp maintains the club’s longing for the Premier League title will not hinder efforts to go one step further in this season’s Champions League.

“We will try [to go for both], for sure,” the Liverpool manager said. “That is what we tried last year. There was the discussion this year when people said we should focus only on the league so now we are still in the Champions League and I am quite happy about it. We have a very difficult game yet listening to some people it seems we are already through because ‘It’s only Bayern Munich’. Have you looked at the team they have or how they are in shape now after the winter break?

Liverpool travel to West Ham with continued injury problems in defence, although James Milner is available after suspension to deputise at right-back. Trent Alexander-Arnold and Joe Gomez remain on the sidelines through injury and it was confirmed yesterday that Dejan Lovren will miss out with a recurrence of a hamstring problem. Jordan Henderson, who filled in at full-back in the 1-1 draw with Leicester City, has been unable to train fully recently due to a calf injury.

Klopp, however, believes his leaders have already demonstrated their willingness to fight for every point and that spirit will be essential to ending Liverpool’s desperate wait for a 19th league championship.

The Liverpool manager added: “After the Leicester game I heard the words from [Claude] Puel that they deserved more. I don’t know where he got that from to be honest but it’s all good, he is entitled to his view. It was an absolutely normal game and we drew. That happens, it will happen again this season. Probably. We are still in the race and if we dropped points or whatever, then it’s still a point against Leicester. Let’s carry on again.

“But the next game is difficult again and then comes Bournemouth, who beat Chelsea 4-0 and not because Chelsea made them presents. So that’s the season. If you want to finish the season now then leave. Come back in May and we play another one. We cannot change that. We cannot talk week in, week out about the mindset because it will not change.