Unless you’ve been transferred for a huge fee, good luck getting a Premier League game, son 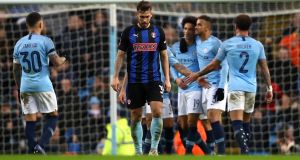 Joe Mattock of Rotherham United looks dejected during as Manchester City go 7-0 up during the FA Cup third round clash at the Etihad. Photo: Clive Brunskill/Getty Images

Next year will be the first season of English football to include an official winter break. But the third round of the FA Cup has served as an unofficial mini-break for many years.

For the clubs, FA Cup third-round weekend means a chance to rest the stars and pick the young hopefuls and the aging benchmen – your Andreas Pereiras, your Alexis Sánchezes. For the supporters, it’s turned into a chance to go do something else with their lives.

Why has this happened? The main reason is that the big clubs transparently no longer care about the competition, and yet their squads are so strong that they still win it nearly every year. Twelve of the 18 cups this century have been won by Arsenal or Chelsea. Cup success has not brought happiness. Arsène Wenger was sacked the year after winning his third cup in four years. As for Chelsea, if they had beaten Manchester United in a cup final in the 1970s or 80s, it would have been celebrated as one of the greatest moments in the history of the club. When they did it last May it wasn’t enough to keep Antonio Conte in a job, any more than it could save Louis van Gaal when he won it with Manchester United in 2016. When a competition means this little to the teams that actually win it, the also-rans can be forgiven if they lost interest long ago.

Manchester City (reserves) 7-0 Rotherham, Spurs (reserves) 7-0 Tranmere – this is how financial inequality destroys a national cup competition. The gap between the resources of a big Premier League club like City and a team like Rotherham is now so enormous that there is hardly any point in them being on the same pitch beyond a sort of freakshow novelty value. As Rotherham’s manager Paul Warne commented after the City game: “Their slowest player is quicker than my quickest player.”

The point was underlined by some of the transfers during the week. Chelsea paid €64 million for a 20-year-old winger with 15 senior club goals to his name. Christian Pulisic’s transfer fee was more than 10 times Tranmere’s annual turnover, or 2½ times the average turnover of a club in the Championship.

The fee makes Pulisic the 25th most expensive transfer of all time. But in a world where Dominic Solanke is bought by Bournemouth for €21 million after scoring one goal in 27 appearances for Liverpool, or Brahim Diaz transfers to Real Madrid for €18 million after two goals in 15 appearances for Manchester City, €64 million for the best American player of his generation does not really seem that expensive. Having Pulisic in the team guarantees that Americans will be tuning in to see Chelsea games. The value of that to Chelsea’s sponsors is obvious.

However, the coincidence of the Pulisic signing with Bayern Munich’s interest in their own young winger, Callum Hudson-Odoi, has created an awkward dilemma for Chelsea. On the one hand, Bayern have bid more than £30 million for a player that has been involved in only one Premier League match under Maurizio Sarri. From this perspective, selling him is an easy decision.

And yet you also have to wonder why Chelsea would pay €64 million for a young American winger when they already have a slightly younger English player of similar potential who can’t get near their team?

Yes, Pulisic is clearly the more valuable commercial property right now, but if Hudson-Odoi turns out to be one of the top English players of his generation, might he not be more valuable still? And what about the intangible value to Chelsea supporters of seeing their home city represented in the team?

Hudson-Odoi’s problem is that Premier League teams are not picked on merit alone. It’s not like he is the only decent young player at Chelsea. They’ve won the last five FA Youth Cups in a row, and seven of the last nine. And, Ruben Loftus-Cheek aside, almost none of these players have gone on to success with Chelsea at senior level.

If you want to understand why, simply imagine that you are the Chelsea manager. You know that even a very talented young player is likely to make mistakes and be inconsistent from week to week – they will always take 30 or 40 matches to figure out what they’re supposed to be doing. You also know that you will be sacked if you fail to win the Premier League. Your squad is full of older players; they might not be spectacular, but they are experienced and more or less dependable. In the circumstances, it’s clear that you will only ever pick young players for the first team if you have a massive injury crisis – or maybe an FA Cup third round game.

The exception is when the young player has been signed for a large transfer fee. Picking such a young player will not be regarded as a risky solo run by you – the fee has made the club complicit. In fact they will be annoyed with you if you don’t pick their expensive young signing.

So this money-obsessed league has reached a situation where a transfer fee has become almost a necessary credential for a young player who wants to get into a Premier League team. There are exceptions – Trent Alexander-Arnold, Marcus Rashford – but, as a general rule, a player who comes direct from the youth team is not to be taken seriously.

Uprooting himself from his home city and his home club at the age of 18 makes little sense from either a human or a sporting perspective, but if Callum Hudson-Odoi wants to become a star in the Premier League of the 2020s, the best thing he can do is make sure some club pays a big transfer fee for him as soon as possible.