‘I won more Premierships alone than the other 19 managers together,’ he said 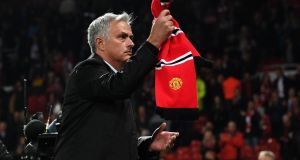 José Mourinho stayed on the pitch to applaud the Manchester United fans after their defeat to Tottenham Hotspur. Photo: Michael Regan/Getty Images

An angry José Mourinho demanded “respect, respect, respect” for his three Premier League titles following Manchester United’s 3-0 defeat. He had been talking up United’s display, claiming they could have been 3-0 ahead at the break and stated that the best judge were fans who applauded at the close. Yet large swaths of supporters had left well before the end.

When it was put to him what judgment this represented, Mourinho went into near meltdown. “I would do the same, losing 3-0, taking two hours from here to the centre of Manchester, because it’s where I live and I know that after matches it takes two hours, so I would do the same, so keep trying, keep trying, keep trying,” he said. “We lost last season here against Sevilla [last season in the Champions League last-16] and we were booed, because we deserved, because we were not good, because we were not dangerous enough, because Sevilla deserved to win the match.

Mourinho held three fingers up. “Just to finish, do you know what was the result?” he said, indicating his digits. “3-0, 3-0. Do you know what this is? 3-0. But it also means three Premierships and I won more Premierships alone than the other 19 managers together. Three for me and two for them two [Pep Guardiola and Manuel Pellegrini]. So respect man, respect, respect, respect.”

Goals from Harry Kane and Lucas Moura on 50 and 52 minutes before the Brazilian’s second six minutes from time completed the scoring.

Mourinho started with Ander Herrera in an unfamiliar centre-back position in a back three and he was again irritated when asked if dropping Victor Lindelof, a career centre-back, for Herrera might affect his confidence. “You want to make the miracle of my team played so well and strategically we were so good and you want to try and transform this press conference into ‘Let’s blame the guy’.

The 55-year-old admitted he is not certain about his defence. “Why no? Because in the first game [Victor]Lindelof and [Eriv]Bailly, now [Phil]Jones and [Chris]Smalling but now Jones is injured and next match will be Smalling with another one and when Marcos Rojo comes [back]he will be an option and I don’t know my best back four.”

Mauricio Pochettino spoke for the first time about Hugo Lloris’s drink-driving charge. “It is a massive lesson for everyone. He is punishing himself. He feels so sorry and so bad,” said the manager. “He knows he made a big mistake. In the same way it is out of character. We are going to support him but knowing that we cannot justify.” – Guardian service