Dedryck Boyata redeems himself with winner at Parkhead 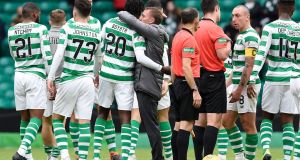 Dedryck Boyata redeemed himself with Celtic fans by scoring the only goal of the game in the Ladbrokes Premiership win over Hamilton at Parkhead.

The Belgium international defender returned to the side after his controversial decision not to play in the Hoops’ recent Champions League exit against AEK Athens in Greece — he claimed to be injured while boss Brendan Rodgers disagreed.

The 27-year-old provided some early pantomime with some fans booing and others cheering, while a derogatory banner was held aloft before the game.

But in the 63rd minute there was only green and white joy when he knocked in from close range.

Although uncertainty remains over Boyata’s future, it was an important contribution to Celtic who face two more crucial home matches next week, the second leg of their Europa League play-off with Suduva — the tie is poised at 1-1 — and the first Old Firm game of the season against Rangers.

Boyata had come out to see a banner held up among the ultras group, The Green Brigade, which read, ‘Boyata — not fit to wear the jersey’ and there was a mixed reception to his early touches before the supporters turned their attention to winning three points, which proved more problematic than envisaged.

The visitors, with Delphin Tshiembe, Dougie Imrie and Steven Boyd reinstated, almost surprised Celtic before a minute had elapsed when striker Mikel Miller burst into the box before his drive was pushed past the post by keeper Craig Gordon, the corner coming to nothing.

The champions asserted themselves and dominated possession amid a subdued atmosphere.

In the 15th minute Accies keeper Gary Woods touched James Forrest’s curler from the edge of the box on to the post to concede a corner which Mikael Lustig flicked past the near post.

Hamilton remained disciplined and diligent in their defending but escaped just before the break when Moussa Dembele headed a Forrest cross past the far post, the French striker then skimming the bar with a 25-yard curler right on half-time.

The second half continued along the same lines with Celtic huffing and puffing and Hamilton offering little in an attacking sense.

Callum McGregor and Dembele both missed the target after being set up by the marauding left-back Kieran Tierney.

Accies tired and dropped deeper and after Dembele headed a Lustig cross over the bar from six yards, they were eventually undone.

A Leigh Griffiths corner from the left was helped on by Dembele and when Lustig headed back across goal Boyata was on hand to force the ball over the line.

His next touch brought cheers and indeed he should have scored a second in the 77th minute when he scooped over the bar from 12 yards after the Accies defence got tangled up, but ultimately his earlier goal proved enough to secure the win.

Elsewhere, Peter Hartley had the last laugh over Rangers as the Motherwell skipper’s 94th-minute equaliser sealed a 3-3 draw at Fir Park.

The defender had been forced to issue an apology on Thursday after mocking former Gers defender Fabio Cardoso and the broken nose he suffered in a tussle with Well frontman Ryan Bowman last term.

But it was Hartley who grabbed the injury-time equaliser as the Light Blues threw away victory for the second time in three Ladbrokes Premiership games.

Rangers found themselves behind for the first time under manager Steven Gerrard as Danny Johnson opened the scoring early, but they fought back twice with goals from Kyle Lafferty after Carl McHugh had also struck for the hosts.

It looked like Ovie Ejaria’s goal just before the break would secure all three points, only for Hartley to pounce with the last kick of the game.