Watford make it three from three with Crystal Palace win 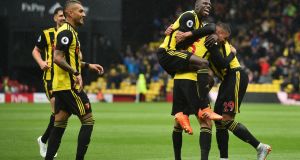 Unfancied Watford continued their great start to the Premier League season with a third successive win when they beat visiting Crystal Palace 2-1 on Sunday.

It is the first time they have begun with three wins out of three in the top tier of English football, keeping them right up among the early pacemakers.

Etienne Capoue might have been sent off for an early foul on Wilfried Zaha, so Palace were aggrieved that he made the opening goal for Roberto Pereyra in the 53rd minute.

Defender Jose Holebas doubled the lead with what he confessed was a cross before Zaha reduced the arrears 12 minutes from the end.

Palace wasted a glorious chance to draw in the final seconds of added time when Joel Ward headed wide from a corner after being left unmarked.

Zaha, their most talented player, was a central figure from the fourth minute of a feisty encounter, when many observers felt Capoue should have received a red card rather than a yellow for a foul on him.

Within three more minutes Zaha himself was booked.

His team had started well and former England goalkeeper Ben Foster kept the home side in the game early on with two fine saves, from a header by Christian Benteke and then from James McArthur. Dangerous winger Andros Townsend created each chance.

Watford took 20 minutes to threaten, when Argentine forward Pereyra had one shot blocked and then another saved in quick succession.

The home side’s pressure was maintained either side of halftime and after wasting one chance by shooting wildly, Pereyra took Capoue’s pass for a low finish into the corner of the net.

Benteke created the best chance to equalise before Holebas deceived goalkeeper Wayne Hennessey from out on the left wing.

“It should be a cross to be honest, on my weak foot, but I think no-one complained that it went in,” the Greek international fullback said.

Zaha cut in to shoot through Foster’s legs and ensure an exciting finish in which Ward’s miss denied Palace a point, keeping them in mid-table with three points.

Watford captain Troy Deeney felt his team had luck on their side.

“We were poor by our standards but the grit and determination and will to win has been clear to everyone,” he said. “We got lucky but it gives us confidence we can be poor and still get results.”