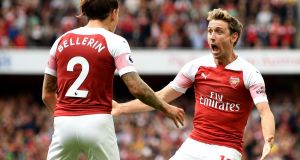 Unai Emery toasted a first victory as Arsenal head coach as his side came from behind to seal an unconvincing win over London rivals West Ham.

The Gunners had lost to Manchester City and Chelsea in Emery’s first two games at the helm and could easily have slipped to a third defeat before eventually running out 3-1 winners at the Emirates Stadium.

West Ham, who have now lost their first three matches under Manuel Pellegrini, took the lead through Marko Arnautovic only for Nacho Monreal to equalise soon after.

Arsenal went in front through a debut own goal from Issa Diop and Danny Welbeck came off the bench to score a late third.

As Jack Wilshere made his Emirates Stadium return, Mesut ÖzilMesut Özil was missing from the Arsenal squad – officially through illness but with some reports suggesting he was dropped after a fall-out with Emery.

Either way, the Spaniard finally got his maiden win to kick-start his tenure despite questions remaining over the defensive ability of his side.

Another former Arsenal player made an immediate impact as goalkeeper Lukasz Fabianski kept out Henrikh Mkhitaryan’s strike with a tremendous stop.

Aaron Ramsey nodded in the rebound but was flagged offside, before West Ham broke and Arnautovic arrowed an effort into the side-netting.

The Hammers grew into the contest and attacked a nervy Arsenal defence at any given opportunity.

That threat eventually led to the opening goal, Arnautovic rifling home from the edge of the box after an exchange of passes with Felipe Anderson.

Emery’s men responded well to their latest setback, levelling five minutes later as Monreal was on hand at the back post to turn home Hector Bellerin’s deflected cross.

Petr Cech was on hand to keep the hosts level going into the interval, Robert Snodgrass finding space in the box to test the Arsenal skipper on the stroke of half-time.

Arsenal introduced Alexandre Lacazette in place of Alex Iwobi at the break but it was Shkodran Mustafi who almost put the hosts in front soon after the restart – Fabianski again making a smart stop to keep out the German’s header.

In an end-to-end start to the second half, Pellegrini’s men passed up another great chance to re-establish their lead.

Matteo Guendouzi was robbed of possession by Anderson, who broke forward and crossed for Arnautovic but he could not make telling contact and Cech saved easily.

Arnautovic was then forced off injured and soon after his side were unfortunate to fall behind.

Pinball on the edge of the Hammers box saw the ball fall to Lacazette, whose cross cannoned off Diop and into his own net to put Arsenal ahead.

Fabianski kept out Pierre-Emerick Aubameyang’s low drive and a superb long-range Ramsey effort while West Ham’s late rally failed to produce an equaliser as Welbeck scored a simple goal to seal the three points for Arsenal.