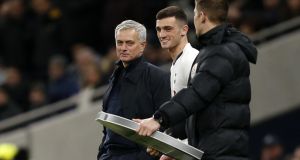 Tottenham Hotspur manager José Mourinho chats with Troy Parrott as he prepares to come on during the Premier League match against Burnley. Photo: Ian Kington/Getty Images

José Mourinho has moved to dampen expectations surrounding young Dublin striker Troy Parrott with the Tottenham Hotspur manager saying he has made it clear to the 17-year-old that he needs considerably more football under his belt before he will be ready to make his mark in the Premier League.

Mourinho handed Parrott his top flight debut for the London club at the start of December and has spoken highly of the player but the young striker has not featured since despite an injury to Harry Kane that many hoped would move him one place up the pecking order.

Kane had 17 goals in 25 games in all competitions for Spurs when he was forced out of the away defeat by Southampton on New Year’s Day with a hip injury that is now expected to keep him on the sidelines until at least April.

Parrot was on the bench for the FA Cup game in Middlesbrough four days later but has not even been a substitute since.

The Dubliner had made his first team debut in a League Cup game at Colchester back in September, the same night 20-year-old defender Japhet Tanganga got his first start for the club.

Both played 66 minutes that night and had to wait a while to feature again but the Londoner has recently broken into Mourinho’s starting line up with the initial vote of confidence coming before the visit of league leaders Liverpool to Tottenham last Saturday week. Since then he has also started against Middlesbrough (in the FA Cup replay win) and Watford.

Asked if Parrott could make the same sort of breakthrough over the coming months, Mourinho was fairly blunt, saying he could talk about the player’s progression because he had just done so with the Irishman himself.

“I’m ready to answer you because I had a long conversation with him today,” Mourinho said at his press conference to preview Wednesday’s league game at home to Norwich, “so I’m ready to share with you a little bit.

“I think he has potential,” he said. “I think he needs to work a lot. He has a process to go through, a process that probably Tanganga had. One thing is 17 and another thing is 20. We are speaking about three years of distance and three years.

“Okay, in Tanganga’s case it was three years without a Premier League match, but it was three years or working and playing, playing in his age groups, playing in England (youth) national team, which also gave him some experience. Then with me it was just the last part of his preparation before he had his first opportunity.”

Parrott, who has done well for the Tottenham Under-23 side and Ireland under-21s, made his senior international debut in the 3-1 win over New Zealand in November but clearly does lack senior competitive experience.

“I think Troy has to go through a process. Can he have minutes? Yes he can minutes. I’m not saying he’s not able to have minutes, but to put on his shoulders the responsibility of replacing somebody (Kane) to be replaced; I don’t think he’s ready at all.”