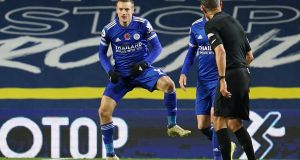 Leicester are up to second in the table after a fourth successive away win in the Premier League. Had they finished as strongly as they started they might have inflicted the heaviest home defeat of the season on Leeds, though the home side overcame a dreadful start to be in with a chance of a draw in the second half.

They were eventually undone, as a few more sides will surely be this season, by the unfailing appetite and opportunism of Jamie Vardy.

Played in torrential rain, the game got off to a remarkable start. Leeds had a great chance to open the scoring in under two minutes when wonderful link play between Pablo Hernández and Hélder Costa led to a free header for Patrick Bamford on the six -yard line.

Unfortunately for the home side Bamford placed his effort straight into Kasper Schmeichel’s arms, and for the goalkeeper to start an attack that ended up in Illan Meslier’s net.

Schmeichel fed Christian Fuchs on the left for the defender to send a straightforward ball down the channel, only for Robin Koch to lose his bearings when challenged by Harvey Barnes.

Koch had a chance to clear but missed it and allowed Barnes to get goalside, then an underhit backpass merely invited Jamie Vardy to take over, claiming possession first then flicking the ball back into Barnes’s path to cut out Koch and the goalkeeper.

Leeds had been opened up by Leicester’s first attack, and it was evident Vardy had the pace, touch and balance to cause the home defenders problems on a slippery surface.

Meslier came to his side’s rescue with a one-handed save when Barnes sent in a well-struck shot, before Leeds lost the ball in their own half and were punished by a second goal before the mid-point of the first half.

Youri Tielemans started the move and finished it but Vardy’s movement was again key, losing his markers to reach Marc Albrighton’s cross with a stooping header that Meslier could only push into Tielemans’s path.

Adapting to the conditions far better than the home side, keeping things simple yet brisk, Leicester tore holes in the Leeds defence virtually every time they went forward.

Leicester could have had more before the interval, Luke Thomas saw a shot saved and Meslier almost fumbled a cross into his own net.

When Leeds had a chance to hit back just before the break they were unable to take it. Bamford stayed onside to accept Luke Ayling’s clever ball into the box, yet perhaps still troubled by his earlier miss his first touch was heavy enough to allow an alert Schmeichel to smother at his feet.

Marcelo Bielsa sent on Ian Poveda-Ocampo in place of the debutant Jamie Shackleton for the second half, but the fact Leeds pulled a goal back within three minutes of the restart was for a change down to uncharacteristic uncertainty in the visitors’ defence rather than the hosts.

Nothing seemed on as Leeds played a short corner backwards and Stuart Dallas hoisted a diagonal cross towards the far post, yet everyone in the penalty area missed it, and when last defender Fuchs failed to clear Schmeichel suddenly realised he was in no position to prevent the ball creeping inside his left hand upright.

Fortunate or not, the goal delivered a much-needed boost to the home side’s confidence. Leeds asked more question of Leicester in the first 10 minutes of the second half than they had managed in the 45 minutes that preceded it, with Ayling only inches from finishing a move on the six-yard line and Hernández curling a shot on to the angle of post and bar.

Suddenly there was a contest where in the first half there had been no sign of one. Mateusz Klich tested Schmeichel from distance as Leicester took a turn at being pinned back in their own half, prompting Brendan Rodgers to introduce James Maddison from the bench in an attempt to reproduce the attacking superiority Leicester had enjoyed in the first half.

It did not work to quite such impressive effect, yet to Rodgers’s credit, the winning goal was engineered by not one but two of his substitutes. Maddison picked up the ball in space in the middle of the Leeds half, looked up and threaded a perfectly weighted pass to pick up Cengiz Under’s supporting run on the right.

The Leeds cover arrived just as the substitute was making his mind up whether to shoot or pass, but the ball went towards goal rather than away from it and to no one’s surprise Vardy was ideally placed for a tap-in and a seventh goal of the season. Tielemans scored his second with a VAR-awarded penalty for a Klich foul on Maddison. It was Vardy’s night though,even on 85 minutes Leeds must have been glad to see the back of him. – Guardian