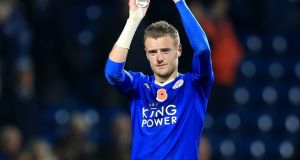 Human beings shut inside deep freezers traditionally face unhappy endings but there are exceptions to every rule. Rather than proving the subject of a blood-curdling murder mystery or some awful industrial mishap Jamie Vardy finds himself cast as the leading man in one of the more uplifting dramas to emerge from the Premier League in recent seasons.

It is partly thanks to the science fictional-looking cryotherapy chamber installed at Leicester City’s training ground. After persistently submitting himself to its minus 110F chill last week, the former non-league striker was able to overcome a hip injury in time to equal Ruud van Nistelrooy’s record of scoring in 10 successive Premier League games.

As if that were not enough, Vardy’s opening goal set Claudio Ranieri’s side on course for a victory which took them to the top of the table. Considering that this time last year Leicester were everyone’s relegation favourites and the 64-year-old Italian’s appointment in place of the sacked Nigel Pearson in the summer was widely mocked, that represents quite an achievement.

“Mr Ranieri might be getting the pizzas in for us again,” said Vardy, who hopes to break Van Nistelrooy’s record when Manchester United visit the east Midlands on Saturday.

The first cold weekend of the north-east winter had left the No9 shivering as he spoke but Vardy is well accustomed to Arctic chills. “I’ve used the cryo chamber all week and it feels like I’m stood in it now,” he joked. Leicester’s very own torture chamber accelerates recovery from injury and, allied to some intense, cutting-edge physiotherapy, Vardy was able not only to start but to petrify a shockingly slapdash Newcastle United defence.

“The cryotherapy chamber is absolutely freezing but it helps you in your recovery, so fair play to the club for getting it,” he said. “I was very close to not playing but the physios have been brilliant. I don’t think even some of the brainiest men in the world would understand the name of stuff they’ve been doing but they’ve been working constantly on me all week.”

Ranieri’s voice has also been in his ear. “During the week we look at ways I can get into my best positions,” said Vardy. “We concentrate on what the opposition defenders are like, if they’re going to come in for the tackle, and then we put it into practice. It’s obviously working.”

If only Steve McClaren could say the same in the wake of a woeful Newcastle performance in which only Vurnon Anita emerged with any sort of credit. Devastated by Vardy’s wonderful change of pace and clever movement, they fell behind to a shot he directed just inside the near post at a moment when Rob Elliot expected him to aim for the far upright.

“We looked fragile,” said McClaren, the resounding jeers from the Gallowgate still echoing in his ears. “It’s probably the most disappointed I’ve been. But we’ve always known we’re going to have bad days.”

Already missing the injured Jack Colback, his relegation-threatened side simply fell apart when Cheick Tiote limped off with groin trouble. Tellingly, most of Newcastle’s problems stemmed from the consequent weakness in a skinnily staffed central midfield. It is in this department that McClaren’s attempts to introduce a more possession-based game are foundering.

In such depressing circumstances home fans deserve particular credit for applauding Vardy’s landmark goal. Ranieri, quick to commend them, likened such generosity of spirit to that customarily extended to Gianfranco Zola at Chelsea.

If it felt slightly surreal to hear the former Stocksbridge Park Steels striker spoken of in the same sentence as Zola, comparisons to Argentina’s Gabriel Batistuta are probably the most pertinent right now.

“Batistuta scored 11 goals in a row for me at Fiorentina, ” recalled Leicester’s manager. “That’s the best run by any player I’ve managed. Hopefully Vardy can beat that. It’s amazing we’re mentioning Jamie in the same breath as Batistuta. It’s so strange when, four or five years ago, Jamie was playing non-league football.

“In my career I’ve known just one player who took the same route to the top. He was a Juventus right-back, Moreno Torricelli, who went from non-league Caratese to Serie A. And then he won the Scudetto with Juventus.” What do they say about history repeating itself? Guardian Service