Jürgen Klopp has no problem with Liverpool winning ugly 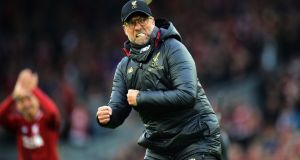 Jürgen Klopp said a first league title for 29 years would be reward for Liverpool’s formidable willpower after they staged another dramatic late flourish to beat Tottenham and return to the Premier League summit.

The Liverpool manager admitted his team had won ugly and fortuitously as a damaging draw turned into a potentially defining three points with Toby Alderweireld’s 90th-minute own goal. Spurs were the superior side in the second half, with Lucas Moura equalising after Roberto Firmino’s early header, only for Hugo Lloris to spill Mohamed Salah’s effort on to Alderweireld and give the hosts victory. Moussa Sissoko squandered a glorious chance to put the visitors ahead moments before the World Cup winning goalkeeper’s mistake.

Klopp described the victory as “rather ugly” but agreed a last-minute winner against arguably Liverpool’s toughest remaining opponent this season could have a major impact on the title race. “One-hundred per cent, of course,” he said. “If you win 5-0 – and I don’t think that would have been possible today – it can lead you on the wrong path. We are all human beings. Nine months ago we started this mission, this ride, and wanted to go for the highest stakes in two competitions. We did it our way. We had to find a way to win games much more often than in the past. Until now it worked. It is all good.

“The boys work so hard and if we could be first in the table after the last match of season then it would be a championship of will. We want it. We get used to situations, bit by bit, a bit better. The whole stadium, at 1-1, was the best performance of a Liverpool crowd after an equaliser since I am in. The atmosphere was completely front-footed. I am really happy about the attitude again today.”

Klopp said it was essential Liverpool maintained momentum to keep the pressure on Manchester City but admitted luck played its part in their 14th home league win of the campaign. “We have seven players in the box and another two on the left wing for the cross,” he explained. “That’s not a lot left for protection! But that’s the risk you have to take.

“Of course it was a lucky punch, the header and the ball rolls in, but I told the boys after the game there are 500,000 different ways to win a football game and today was rather ugly. No problem, we take that. Without a bit of luck you cannot be in the position we are in. It’s not possible. The boys work so hard, I think they deserve a bit of luck.”

Virgil van Dijk, who defended superbly to thwart Sissoko’s chance, left Anfield an ice pack on his ankle. “I don’t think it’s serious,” said Klopp. “I have to check.”

Salah, meanwhile, was thrilled with his decisive contribution despite an eighth game without a goal. The Egypt international said: “I don’t score for a few games and there are players on the same number of goals as me and they say they are having the best seasons of their lives, while I’m supposed to be having a bad season.” – Guardian