Aubameyang completes the deal as Arsenal turn shambolic display around

Trailing 2-1 and down to 10 men, Unai Emery’s side claim all three points against Aston Villa 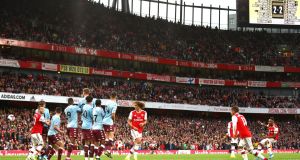 Arsenal are going through a period that defies both description and logic, but it is certainly fun. After a week that had showcased them in microcosm, this time their thrilling best and shambolic worst were distilled into a mere 90 minutes.

They had been so sloppy in drawing at Watford and so vibrant in defeating Eintracht Frankfurt that any attempts to predict what might follow against Aston Villa seemed futile.

At half-time they were a goal behind to Niall McGinn and a man down to Ainsley Maitland-Niles’s red card; by the end they were wild-eyed as Nicolas Pepe’s penalty, a Calum Chambers strike and a sweet Pierre-Emerick Aubameyang free-kick had turned their afternoon around, the second of those goals coming after Wesley had re-established Villa’s lead. A game that could have become a defining low point in the Unai Emery era became one that may yet provide some kind of basis for lift-off.

That looked far off early on, even if McGinn’s goal came at a time when Arsenal appeared to be getting on top. The problem, when your defending is habitually so careless, is that failure to capitalise on good spells risks extreme punishment.

This latest exhibit in their collection of clangers came about when Maitland-Niles, seemingly content to offer Anwar El Ghazi all the time he required to check onto his right foot, failed to do anything about the ensuing cross either.

If that was a dereliction of duty then the failure of Matteo Guendouzi to stay with McGinn was criminally negligent. Guendouzi stood still while the Villa midfielder ran into the penalty area and diverted the delivery past a helpless Bernd Leno.

Maitland-Niles had missed a presentable chance after just over a minute, ballooning over after good work from Bukayo Saka. Seven minutes before half-time he found room for one more mistake. Already booked for clipping El Ghazi, he slid in for a meaty challenge with Neil Taylor and won the ball. But his follow-through took the man and gave the referee Jon Moss a decision to make. He took it quickly enough, promptly reaching for a second yellow card, but did not make it official until Maitland-Niles had spent two minutes receiving treatment for a knock sustained in making the tackle.

Off the ball, Arsenal had been a disaster. Their midfield of Guendouzi, Dani Ceballos and Granit Xhaka was nowhere to be seen whenever Villa sprang upfield. A hologram would have made more impression than Ceballos when Trezeguet ran through him to create a shooting chance for McGinn, who would test Leno twice before scoring.

When Sokratis Papastathopoulos pretended Wesley had clipped him around the face in a pathetic attempt to create a 10-a-side game, the sheer scale of the centre-back’s desperation aptly summed up Arsenal’s first half. Emery sought to shore things up by introducing Chambers for the unlucky Saka, who had made his first top-flight start after a superb showing in Frankfurt on Thursday.

Yet they stayed in the game and had just begun to force a few hurried clearances when Guendouzi, far keener to take responsibility now, made a determined run into the area. Bjorn Engels bundled him over; a penalty was inevitable and Pepe drilled it down the middle.

Parity lasted under two minutes and that was largely down to Jack Grealish. His run to the left byline left three Arsenal players trailing and created space for a centre that Wesley, getting in ahead of Guendouzi, nicked into the bottom corner. For a second time Villa had what at that point they deserved; for Arsenal, it all felt so familiar.

Guendouzi, by now operating like a man possessed, rapped the post with a low drive from 25 yards and David Luiz forced Tom Heaton to tip over a free-kick.

The appetite for another comeback among players and crowd was clear enough and, remarkably, it was sated with 10 minutes to play. Tyrone Mings had, to that point, been a Rolls-Royce at the back for Villa but tried to be too clever by attempting a cushioned header towards Taylor. Chambers was alert enough to steal in and jab into the roof of the net from an angle, and now the game was anyone’s.

It ended up being Aubameyang’s. He won the free-kick himself, drawing a foul from Engels, and promptly curled it past a questionably-positioned wall and goalkeeper to bring the house down. Arsenal had bailed themselves in rousing, rumbustious style; now they simply long for the day when such brinkmanship becomes unnecessary. – Guardian