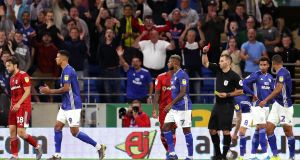 Harry Arter was sent off on his Cardiff return as 10-man Fulham held on for a 1-1 draw in the Welsh capital.

A slow-burner of a Championship contest exploded into life with two goals in three minutes just before half-time, Fulham forward Aleksandar Mitrovic’s close-range effort cancelling out a Josh Murphy strike.

But the temperature really soared midway through the second half when Arter, who spent last season on loan at Cardiff, picked up two yellow cards in as many minutes.

The Republic of Ireland midfielder scythed down Joe Ralls and was then sent off after 68 minutes when referee Tim Robinson was unimpressed by his theatrical fall as Sean Morrison challenged him for the ball.

Fulham probed in the early stages with Tom Cairney picking out Joe Bryan with a delicious pass and the left back forcing a save from Alex Smithies at his near post.

Anthony Knockaert also fired wide but Fulham were almost the masters of their own downfall when Alfie Mawson hesitated in possession, although the centre back atoned by quickly getting back into position to block.

Cardiff’s best route to goal was down the left where Murphy tested young Fulham right back Steven Sessegnon.

Murphy stayed onside to deliver a cross that Marcus Bettinelli pushed onto the knee of Gavin Whyte, and the Fulham goalkeeper was relieved to see the ball roll wide of his post.

Fulham fell behind after 42 minutes as Aden Flint dispossessed Ivan Cavaleiro on the halfway line and freed Murphy, who advanced to beat Bettinelli with a firm left-footed finish.

Bettinelli denied Robert Glatzel his first Cardiff goal moments late with a superb one-handed save, and the importance of that stop was underlined instantly.

Cairney cut the ball back to Cavaleiro and his cross went unchecked to the far post where Cardiff were dozing.

Mitrovic had the simplest task to score for the fifth successive game and join Swansea’s Borja Baston at the top of the Championship scoring charts with five goals.

Fulham had 74 per cent of possession in the first half and they kept the ball for long spells as well after the restart.

Arter drove wide before enraging home supporters with the two moments of indiscipline that turned the tide in Cardiff’s favour.

Cardiff wanted a penalty when Flint fell to the floor at a 76th-minute corner, but referee Robinson was not interested and waved play on.

Glatzel and Morrison both headed wide in the closing stages as pressure mounted on the Fulham goal, but Cardiff could not find the winner to save their 100 per cent home league record.