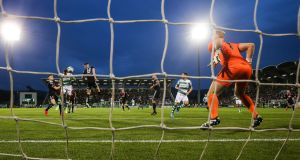 They’ve waited a while for this and the pain of the seven defeats they had suffered in eight games without a win against their cross-city rivals was there for all to see in the way Shamrock Rovers celebrated their hard earned victory at the end.

Having been largely played off the park in the first half, Bohemians made a gripping contest of it for the record Tallaght Stadium league crowd of 7,021 in the second as they chased the equaliser they needed to keep their remarkable run of results going. They couldn’t quite get it, though and Rovers’ clean sheet was their first in one of these games since they last won more than two years ago.

Rovers, who took the lead thanks to Graham Burke’s close-range header 27 minutes in, must have regretted at times not making the game a little safer after having enjoyed a near monopoly on possession deep inside their opponents half. But despite coming under so much more pressure themselves as the evening wore on, they retained enough control over the contest to just about deserve their narrow win.

With the game producing no penalties and barely more than a couple of cards, it was a slightly calmer affair than some of the recent encounters between these two. That seemed to suit a home side who had gifted goals to their rivals in more than one recent derby thanks to the rashness of some their defending.

With Mick McCarthy watching from the stand, Jack Byrne had more than most to play for but it didn’t quite click for him here in the way that it has on so many other nights over the course of this campaign. Instead, it was Seán Kavanagh who caught the eye early on as the tore up and down the home side’s left flank.

The Dubliner’s energy levels epitomised the scale of the effort being put in by the hosts, his cross for the goal, the pin-point accuracy with which they used the ball even as their opponents did everything in their collective power to close them down before any real damage could be done.

By the end, though, it was Burke whose impact had proven decisive for Stephen Bradley’s side. His first-half goal was teed up for him rather nicely by that curling Kavanagh cross but he then weighed in when it mattered most at the other end, clearing off the Rovers line twice in a space of a second or so, first from Darragh Leahy, then from Rob Cornwall.

Leahy went close too with a drive from distance and Andre Wright saw a glancing header bounce a couple of feet wide of the target.

For all the close calls, though, there was never a point when the locals could have been said to be hanging on, for their three central defenders coped very well with whatever came their way. Giving the man of the match award to the one who used to play for Bohemians might just have been part of the fun.