Shane Duffy to lead the Republic of Ireland against Denmark 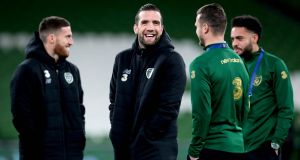 Shane Duffy will captain the Irish team in Monday night’s European Championship qualifier Mick McCarthy has confirmed, with the Derryman standing in for Seamus Coleman who misses the game through suspension after his sending off in Geneva last month.

“He’s been important for a long time,” McCarthy said of the 27 year-old at his pre-match press conference on Sunday morning, “a top, top defender, and he’s got that ability to get a goal. He’s good in both boxes.

“He’s one of them in the squad that everybody looks up to. Just how he plays the game… he gets respect out of people and his team-mates. Without going around screaming and shouting, if we’re having a tough time, he rallies the troops and gets them defending. He blocks things and get his head on stuff, he’s one of those lads you can rely on.”

With a place in the play-offs now assured for Ireland, this game is not quite the do or die affair that it might otherwise have been for his side but McCarthy still seems rather pleased to regard it as something of a cup final with Ireland the underdogs against a team most people, especially the Danes themselves, regard as favourites.

“People’s opinions don’t concern me because it’s on the day,” he says. “Yeah you can be better all the time round. But I’ve seen a lot of cup finals. I was a big Leeds fan as a kid. I remember watching that one against Sunderland and it was a shoo-in. Sunderland couldn’t win and guess what, they did. I’ve seen teams who’ve had everything in their favour and they get slapped, that’s what I hope happens tomorrow.”

Having won one and drawn four of the five recent meetings between the two countries, there is certainly confidence in the Danish camp but also some weariness at having to face what they regard an a tough, physical Ireland side again. McCarthy, though, insists he is quite happy with the pairing.

“This is only my second, don’t forget,” he says. “Age Hareide said he’d had enough of playing against Ireland. That’s not the case for me, this is my second game and I thoroughly enjoyed the first game in Copenhagen. Denmark shaded it certainly for most of the game but towards the end we could have won it. So I’m looking forward to the game; I’m not cheesed off by playing Denmark, not at all.”

McCarthy has everyone still in the squad available with Darren Randolph declared fit to start the game ahead of training. Matt Doherty is all but certain to start at right back in place of the absent Coleman with the manager’s bigger call to be made further forward on that right hand side where Callum Robinson, Callum O’Dowda and Sean Maguire are all among the contenders to start in what is likely to be a front three.