The Manchester derby is the big game on Saturday night 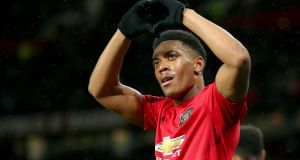 Chelsea striker Tammy Abraham should shake off a knock against Aston Villa to start at Goodison Park. Ross Barkley is back in contention after illness but Antonio Rudiger will not be risked following a pelvic problem.

Bournemouth (14) v Liverpool (1)
Defenders Steve Cook (broken wrist) and Adam Smith (ankle) are both ruled out as Bournemouth bid to avoid their fifth successive defeat. Forward Joshua King (hamstring) is sidelined and midfielder Harry Wilson is ineligible against his parent club. Junior Stanislas and David Brooks are both recovering from long-term injuries.

Burnley striker Ashley Barnes looks set to be restored to the starting line-up after being rested in midweek due to an ongoing groin problem. Kevin Long (hip), Ashley Westwood (groin) and Charlie Taylor (hamstring) are all doubtful, while Johann Berg Gudmundsson misses out.

Aston Villa (16) v Leicester (2) – Live Sky Sports
Anwar El Ghazi could return from a knee injury to face Leicester with the winger set to train on Saturday. Forward Keinan Davis (hamstring) and goalkeeper Jed Steer (Achilles) are ruled out, while James Chester is not match-fit.

Leicester winger Demarai Gray comes back into contention after a bout of flu. Left back Ben Chilwell (hip) is a doubt but midfielder Matty James (Achilles) is the only long-term absentee.

Newcastle (11) v Southampton (17)
Andy Carroll made his first Premier League start of the season following a hip problem in the win at Sheffield United on Thursday night but could be rested for fellow striker Joelinton. American full back DeAndre Yedlin (hip) has also stepped up his recovery, while central defender Jamaal Lascelles (fractured tibia) and midfielder Matt Ritchie (ankle) are long-term absentees.

In-form strike partnership of Lys Mousset and David McGoldrick are likely to be restored in attack for Sheffield United in the only changes to Chris Wilder’s team.

Wolves midfielder Morgan Gibbs-White is still struggling with a back problem which has sidelined him since October. Centre-back Willy Boly (fractured leg) remains out until next year but fellow defender Ryan Bennett (groin) is fit.

Midfielder Dani Ceballos (hamstring) is the only confirmed absentee for Arsenal. Centre-back Rob Holding has not featured in the last three games but could be in contention following a slight knee issue.