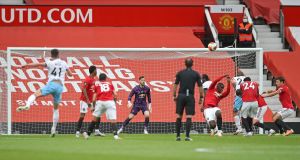 Mason Greenwood’s 17th goal of the season places him alongside George Best, Wayne Rooney and Brian Kidd as Manchester United’s most prolific teenagers. More importantly his second-half equaliser means Ole Gunnar Solskjær’s side have only to draw at Leicester on Sunday’s final day to seal fourth place and Champions League qualification: a demand the manager would have accepted during the dark days of winter.

The error-prone David de Gea was retained by Solskjær, while Timothy Fosu-Mensah came in for Aaron Wan-Bissaka at right back – due to a knock, the manager explained.

West Ham’s goal difference made them all but safe and David Moyes sent out an unchanged XI in what was a second return to his former club as manager.

United’s initial intent was shown when Bruno Fernandes slid Anthony Martial in along the right. The centre forward dipped a shoulder and forced a sharp save from Lukasz Fabianski.

Greenwood then did precisely the same moments later and Manchester United’s tempo was already higher than Sunday’s soporific pace when being knocked out of the FA Cup by Chelsea.

Fosu-Mensah, Fernandes, Nemanja Matic, Paul Pogba, Martial and Marcus Rashford were next to probe. Yet United’s rearguard had a scare when Aaron Cresswell swung in a free-kick from the left and the ball was allowed to bounce straight across De Gea’s goal.

United’s forte is attack: a dipping Rashford pass that found Fernandes in the clear was an illustration, though the latter’s clumsy touch let him down. After a too-high Martial shot, Michail Antonio forced a corner that Fernandes inadvertently flicked on and Harry Maguire had to clear. West Ham were dangerous but only when allowed to be. A Rashford dash down a left channel turned a clutch of visiting defenders the wrong way and showed that when United hit higher gear they were a class above.

A patient attack that went from wing-to-wing ended with Fernandes pulling the trigger from long-range: a sign of how robust West Ham were proving.

Then Brandon Williams got the wrong side of Jarrod Bowen, Matic intervened and West Ham had a corner. This was taken short to Bowen and Angelo Ogbonna had a free header he should have worked De Gea with.

The latest in a catalogue of first-half shots from United was fired at Fabianski by Rashford and the goalkeeper had to beat this one away. What United lacked was incision so when Williams did get in behind West Ham this was a rare foray and while his cross fell to Fosu-Mensah, he volleyed weakly.

Disaster struck for United from a free-kick. Declan Rice struck his shot at the wall, Pogba raised his arms to protect his face, the ball hit a hand and VAR awarded a penalty. Antonio made no mistake from the spot.

A sharp word – or three – was needed from Solskjær at the interval. He also took off Fosu-Mensah and introduced Wan-Bissaka.

Finally, United clicked: Pogba fed Greenwood who fed Martial who returned the ball. A second one-two between the pair ended with Greenwood in, and the 18-year-old smashed home for his 10th league goal.

Solskjær’s expression showed relief, an emotion reflected in his substitutes and staff. United had wrested momentum. Suddenly Williams was surging into the area and Bowen pushed him over but VAR was not interested.

Dea Gea had to be as a Bowen snap-shot that hit Williams saw the goalkeeper making a fine fingertip save in what was another West Ham warning.

Another came when Rice unloaded. De Gea was beaten but the effort was off target. This was about United maintaining control and ensuring their unbeaten league run stretched to 13 games.

The best method was to operate in the opposition half, yet West Ham had their moments. A Mark Noble free-kick that Rashford jumped out of way of summed United’s jitters up. But they hung on: now it is all about Leicester. – Guardian