Joanne O’Riordan: NWSL bursts from its bubble and on to mainstream TV 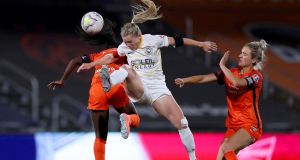 Amy Rodriguez of Utah Royals FC beats Nichelle Prince of the Houston Dash to the ball during the second half in the quarter-final match of the NWSL Challenge Cup at Zions Bank Stadium in Herriman, Utah. Photograph: Maddie Meyer/Getty Images

If anyone is seeking their fix of women’s sports, it comes from the unlikely source of the United States, a country that has been absolutely savaged by Covid-19. But, the National Women’s Soccer League (NWSL) has been a sort of blueprint for other sports, especially in the United States, on how to get back to somewhat normal.

Sure, it didn’t get off to the best start. With a vast number of US women’s national team players opting not to join their respective teams in Utah, and Orlando Pride pulling out under peculiar circumstances after six players and four staff members tested positive for Covid-19. The consequences were that the rest of the teams, including several American national team players and Brazilian star Marta, did not go, meaning one boozy trip to the bar can have a massive impact on your future playing career.

Add to that, fan favourites Christen Press, Tobin Heath, Carli Lloyd, Mal Pugh, Adrianna Franch and Megan Rapinoe did not travel. While Press and Heath cited the uncertainty over the global pandemic, rising positive tests and player welfare, Rapinoe was unusually quiet over her reasons. Carli Lloyd, Franch and Pugh were all in recovery after suffering injuries that needed rest.

So, while CBS had just announced their record-breaking deal to show the NWSL across their streaming platforms in America and Canada, many wondered how it would go, what the reaction would be and was it sustainable across all levels to hold a high volume of games across a short period of time. More importantly for marketing, who would be the draw?

Thirteen of the 23 rostered players on the 2019 World Cup champion US team are set to play in the tournament, including Chicago’s Julie Ertz and Alyssa Naeher, Washington’s Rose Lavelle, Portland’s Becky Sauerbrunn and Lindsey Horan, and North Carolina’s Crystal Dunn and Sam Mewis.

Many players are mothers and had to bring their children, which added a new aspect for those playing sport with children. In fact, NC Courage’s Jessica McDonald’s son became a mini-celebrity in the bubble, playing in the designated playgrounds and being interviewed on what he called “Life in the Bubble with his mom”.

The quality of the games were exactly what we saw in the Bundesliga, La Liga and the Premier League. Mostly the games were played out tentatively, low scoring and relatively defensive and apprehensive. The quarter-finals resulted in deadlocks and plenty of penalty shootouts. Like every penalty shootout, it’s pure luck, and the semi-finals will feature the eighth-seeded Portland Thorns against the number four Houston Dash and the Chicago Red Stars facing Sky Blue FC.

Washington Spirit, who were the number two seed and standout performers, got on a chartered plane on Sunday after losing their quarter-final on penalties against Sky Blue. The players must undergo more testing at home before their three-week vacation. NWSL leaders expect pre-season part two to resume on August 8th for those who didn’t make it to the final week.

The NWSL provided a rare and niche view into what sport will look like, especially for women. Sure, the cost of hosting the tournament while keeping players safe was probably astronomical and given the unique circumstances, we may not see anything similar in the women’s game.

But the NWSL and CBS captured a unique audience and tapped into a rare market that does not have any men’s sports listed. CBS reported the opening game of the tournament became the most-watched match in NWSL league history, with an average of 572,000 viewers on the main CBS television network. While figures have not been released for online streaming platforms, CBS intends to show the final on their main television network, and they say that they are generally excited with the viewing figures at the minute.

Only time will tell whether this first women’s sports bubble was a success. The cost factors and general player wellbeing should be at the forefront of every decision-makers’ mind. It may take quite some time for the pros and cons to weigh out, one thing is for sure, the Olympics and other international tournaments are slowly coming around, and the difference may well be which league managed to keep their players ticking while everyone else waited for more clarity. Only time will tell who got what right.