Fun and net spend the difference between Klopp and Mourinho

Matt Busby used to tell his players to go out and enjoy themselves; Mourinho meanwhile 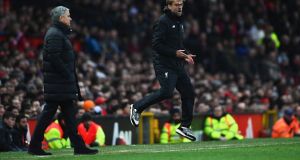 The Premier League table does not lie but the truths it offers can sometimes feel bewildering. How can it be that Manchester United, after this season of gripe and gloom, lie second, nine points clear of the defending champions? How can there be such a fug of insecurity and compensatory self-assertion about their every game when Liverpool, two points behind, are borne on a swirl of positivity?

Largely, of course, it is an issue of perception and starting points. Liverpool fans, 28 years after their last league title, are understandably more enthused by Champions League qualification and a vague sense things are getting better than United fans struggling to adapt to a post-Ferguson reality.

Liverpool have learned the lesson that in England, even amid the rampant inequality of football’s rapaciously capitalistic modern world, having been dominant is no guarantee of future dominance; United, perhaps, are just waking up to the fact they have won the league under only three managers. Poverty may militate against success but wealth and an illustrious history does not guarantee it.

Money is, obviously, a factor. Since José Mourinho arrived at Old Trafford, United have spent £312m on players, a net expenditure of £260m. Liverpool in the same period have spent £221m with a profit of £4m. For all the caveats that can be thrown at those statistics about the squads the respective managers inherited, the fact that Jürgen Klopp’s rebuilding began eight months before Mourinho’s and the distorting effect of the sale of Philippe Coutinho, that is a lot of money for a two-point lead.

But more fundamentally, there is also the not insignificant matter of fun. Perhaps in a normal season that would not be so important. Victory, after all, is the great redeemer, and a triumph in the Champions League may yet make this a memorable time for United. But this is not a normal season. The title race was as good as over by December; that places a greater onus on aesthetics. If United slip out of the Champions League with, say, a routine quarter-final defeat by Real Madrid or Juventus, this will have been a thoroughly forgettable season. Matt Busby used to tell his players to go out and enjoy themselves; Mourinho often seems to tell his players to go out and make sure nobody enjoys themselves.

But to engage with the idea that Mourinho is scorned because he prioritises defensive football – “not a crime” as he put it after the grim 1-0 win over Benfica in October – is to be distracted by one of his deflections. Mourinho was criticised after the stultifying 0-0 draw at Anfield in October not because his side had been defensive but because their defensiveness seemed so unwarranted against opponents who had won only one of their previous five games.

Mourinho will always have his loyalists, the cultists in the stand and on the ranting platforms of the internet, falling over themselves to mix the Kool-Aid and hail his every statement and act as a mark of genius but, even with hindsight, that looks a baffling opportunity wasted.

More recently the quibbles have been less about style than about substance: it is not so much that United have been cautious than that they have been so disjointed, so stodgy. United deserve credit for the spirit they showed in coming from 2-0 down to beat Palace on Monday but the temptation is to reach for the old Matthew Engel line about a friend being put in charge of the prison library: you want to congratulate them but mainly you are wondering how on earth they got into that position in the first place.

It may be that the fluency of Manchester City, Tottenham and Liverpool have recalibrated expectations of how the best sides should play but equally it is hard to see any internal coherence in this United squad. Each new signing feels like another part bolted on, a short-term fix to solve the latest problem.

The recent shift to a 4-3-3 is a case in point. Perhaps it will get the best out of Paul Pogba but if that is the reason for the shift, why did it not come 18 months ago when they broke the world transfer record for him? Romelu Lukaku seems to be revelling in the shape and there is no reason why Alexis Sánchez should not prosper in it but why now? Why the shift a month after the Chilean was signed? It feels like a solution adopted on the fly rather than part of a deeper plan.

Klopp, by contrast, does seem to have an underlying blueprint. There is a structure to Liverpool’s spending and this season there has been clear improvement in the depth and variety of the squad, while always retaining that same basic capacity to press and play at a ferociously high tempo.

Liverpool finished seven points above them last season but United could claim their focus was the Europa League. If United, after these months of toil, nudged ahead of them, that sense of progress at Anfield may come to seem a little hollow.