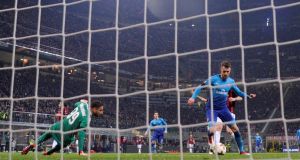 After all the weeks of swimming against the tide, the games when their heads dipped, their bodies felt heavier, Arsenal grasped hold of their Europa League lifebelt and gave themselves a chance of saving their season.

If the latter Wenger years have seen Arsenal drift from challenging for the league, their reinvention as a cup team and ability to conjure one-off performances of the calibre that make you wonder why they can’t do this more often, remains intact. They came to Milan and played like a team determined not to take any more punishment. They reminded their critics – and perhaps even themselves – that on their day they can produce a meaningful win.

What a tonic for the pressurised Arsène Wenger, whose capacity to believe his team can dig their way out of any hole is boundless. The strain had been obvious around the Arsenal squad as they travelled to Milan weighed down by crumpled form and cracked confidence. Somehow the colour returned, happiness began to course through the team and rhythm clicked back. Wenger had urged his team to remember how good they were and his players had the courage to show that – instantly the passes became slicker, the tackles more resilient, the finishes more precise.

In an extraordinary first half the story tilted from negative spiral to positive spin, as Arsenal took a commanding two-goal lead thanks to Henrikh Mkhitaryan and Aaron Ramsey (both brilliantly assisted by Mesut Özil).

Milan’s revival under Gennaro Gattuso has lifted the mood at San Siro enough to inspire a wave of fresh optimism in these parts. A near full stadium crackled with energy. But having surfed a wave of optimism inspired by a 12-game unbeaten run, they looked shellshocked as Arsenal’s character returned. Maybe this kind of opponent was not what they anticipated, as Wenger’s men summoned a performance of commitment and attacking intent.

Milan did start with a flash of vigour, threatening the Arsenal goal twice in the opening couple of minutes. Perhaps the whole affair would have taken a different turn had one of those opportunities been taken. Patrick Cutrone ambled into abundant space on the left but dragged his shot wide.

Milan seemed to be targeting Calum Chambers, the stand-in right back playing in place of the injured Héctor Bellerín, and moments later Hakan Calhanoglu burst through, engaging David Ospina in a foot race. There seemed to be some contact but Ospina was fortunate Calhanoglu stayed on his feet and ran the ball out of play. Referee Clément Turpin waved the game on.

Once Arsenal settled, they burst into the positive flow that had drained away during the recent sequence of losses. Wenger asked his beleaguered team to go back to basics, to be pragmatic, to concentrate on their jobs and dig deep. Arsenal responded by knitting neat moves together to provide a platform. The combinations between Özil, Mkhitaryan and the excellent Jack Wilshere were instrumental.

A quarter of an hour into this open, attack-minded tussle, Arsenal conjured the breakthrough. Ever since they signed Mkhitaryan there have been questions about how feasible it was to play with two luxury playmakers. He and Özil linked up delightfully to provide a meaningful answer here. Özil’s chipped pass was executed perfectly, inviting Mkhitaryan to cut back and let fly. The ball ricocheted off Leonardo Bonucci and over Gianluigi Donnarumma. Milan’s sequence of six clean sheets was over and Arsenal’s celebrations were heartfelt.

Confidence worked its way back into Wenger’s side. When Danny Welbeck and Chambers combined – the former’s neat lay-off met by the latter’s left foot piledriver – it was as good a sign as any that Arsenal were feeling a lot better about themselves.

The chances to increase that lead came in a flurry before half-time. Welbeck seared down the left channel and into the penalty area but his shot was parried by Donnarumma. Mkhitaryan advanced into another promising position only to skim the crossbar. Would they come to regret those opportunities spurned? The question hung in the air until first-half stoppage time. Özil spied another angle of opportunity, Ramsey made one of his forward sprints, and the Welshman’s composure to slip past Donnarumma and tap into an empty net meant the world to Arsenal.

Arsenal’s vulnerabilities suggest resting on the laurels of an uplifting 45 minutes would be risky. Sitting back is seldom their most reliable modus operandi. So they continued to press. Welbeck came close to a third at the start of the second half.

Milan rallied in fits and spurts but Arsenal defended diligently, ending up with a rare clean sheet adding to the feelgood factors they could take back to London. – Guardian service

1 Dan Tuohy explains ‘rotten to the core’ comments
2 Six Nations: No place to hide for Ireland’s misfiring captain
3 From stationary carriers to centres of excellence - five things we learned
4 Kilkenny’s Adrian Mullen ruled out for the season with a knee injury
5 Contepomi says Leinster can learn lessons from nature of Ireland’s defeat
Real news has value SUBSCRIBE
Crossword Get access to over 6,000 interactive crosswords