Liverpool falter again as Ings wins it for Southampton 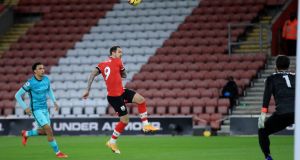 For the millions tuning in at home, it was a toss-up between watching the painful indecision of the UK prime minister or witnessing an endearing and exhaustive Southampton side fell the champions in style. Liverpool were beaten in the league for only the second time this season but Jürgen Klopp spent much of this captivating contest, settled by a nonchalant Danny Ings strike after 112 seconds, pacing the technical area and beyond with all of the self-restraint of Basil Fawlty. The title is now in Manchester United’s hands.

Klopp has made his admiration for Ings clear since the striker returned to Southampton but perhaps the biggest compliment was the one which awaited him here in the form of the Liverpool manager’s lineup, with Klopp fielding Jordan Henderson alongside Fabinho in the heart of defence.

The Liverpool teamsheet was in effect a game of Spot the Defender and, while it was an unorthodox centre-back pairing, Klopp pointed towards Henderson’s telepathic relationship with the Brazilian, albeit “a few yards ahead” of the Liverpool back line, in his reasoning and also insisted he would take full responsibility if his captain was to be found wanting out of position.

This was a frenetic match-up from the moment Klopp left his perch on the advertising hoardings besides the away dugout, the most breathless and bewitching of matches.

Klopp’s team comprised three forwards, four attacking midfielders and two of the best marauding full-backs on the planet. Klopp picked such a front-foot and bold team to help combat Southampton’s aggressive press but Liverpool struggled to live with the hosts’ intensity, with Thiago Alcãntara lured into an early booking on his first start since October and Andy Robertson not too far behind him following a crude challenge on Stuart Armstrong, his former Dundee United and now Scotland teammate.

Klopp was happy to bear the brunt of any criticism for a Henderson ricket but not for a lukewarm performance. He went ballistic as Robertson was enticed into trouble and fumed after Liverpool fell behind with less than two minutes on the scoreboard. James Ward-Prowse dinked a free-kick behind Trent Alexander-Arnold, who was caught ball-watching, and Ings exquisitely lobbed Alisson after latching on to a lovely pass. Thiago was booked a minute later and Klopp raged. “Wake up” he roared. If it wasn’t Klopp, it was Hasenhüttl.

Neither manager required a megaphone to make their voice heard. It was impossible to ignore the booming Hasenhüttl, back on the touchline after remotely taking charge of last week’s stalemate against West Ham a couple of miles away, cajoling every last sinew out of his players.

Liverpool, playing in their camouflage mint green, were conspicuous by their absence in a first half in which they huffed and puffed, failing to register a shot on target.

When Fraser Forster, making his first appearance at St Mary’s for more than three years, was called into action, the assistant referee flagged Mohamed Salah offside. Salah headed over on the brink of half-time after meeting Sadio Mané’s lofted cross but, in truth, Southampton should have headed down the tunnel with a greater advantage. Nathan Tella, a first-half substitute for the injured Moussa Djenepo, dipped a shot wide and Henderson had to be alert to snare the ball away after Ward-Prowse freed Ings. By the time the fourth official, Stuart Attwell, signalled for four minutes of first-half stoppage time, Liverpool could be forgiven for craving the whistle.

Klopp waited until 10 minutes after the interval to make tweak things, introducing Xherdan Shaqiri in place of the former Southampton midfielder Alex Oxlade-Chamberlain, but doubtless made his feelings known at the break.

Alexander-Arnold drove forward with purpose but his cross went unmet and soon after Georginio Wijnaldum powered at goal. His shot appeared to strike the arm of the Southampton defender Jack Stephens but the video assistant referee, Andy Madley, saw it differently.

Pepijn Lijnders decried it an “unbelievable” decision as Klopp remonstrated with Attwell. Stephens was lucky but his block to deny Mané moments later was magnificent.

Stuart Armstrong and then Jan Bednarek threw their bodies on the line in sacrifice though had Henderson not cleared off the line late on, the substitute Yan Valery would have put the game beyond doubt. – Guardian