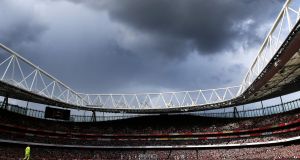 Arsenal will be the first Premier League club to allow fans back into their stadium since March after announcing 2,000 supporters will be able to attend the Europa League match against Rapid Vienna on Thursday. Photo: John Walton/PA Wire

Fans will begin returning to major sporting events from Wednesday as the second national lockdown is replaced by the tier system.

A handful of fans will be welcomed to some Football League matches on Wednesday evening, while four race meetings will also have a limited number of spectators during the day.

Under new rules which began at midnight, a maximum of 4,000 fans can be allowed at outdoor events in tier one — though only a small part of the nation is under the lowest level of restrictions with no football league clubs covered.

In tier two areas, up to 2,000 people can be allowed in, though many clubs are hosting smaller test events before moving to that number. Spectators will still be banned for areas under tier three restrictions.

On Wednesday, 1,000 tickets have been sold for Championship matches between Wycombe and Stoke, and Luton against Norwich.

In League One, Charlton have offered tickets via ballot for their match against MK Dons, while Shrewsbury have issued a small number for their game against Accrington.

Three hundred fans can attend the League Two fixture between Carlisle and Salford, with a limited number to be allowed in for Cambridge’s match against Mansfield.

Race meetings at Ludlow, Lingfield, Kempton, and Haydock will have some spectators.

The four meetings are all in areas under tier two restrictions, though numbers will be kept substantially below 2,000 at first.

Haydock will allow up to 1,000 spectators, with crowds to be in the hundreds at the other meetings.

Fans attending Wednesday’s football matches must remain socially distant at all times, and must wear face marks as they enter the stadium and go to their seats.

They will also be told not to touch the ball if it comes near them, or to approach players before or after the game.

Other restrictions will be determined by individual clubs.

An exemption to current legislation will allow clubs to sell alcohol without a substantial meal, with fans able to drink in the stadium concourses.

On Thursday, the first European football fixture in England to have fans since March will take place when Arsenal host Rapid Vienna in the Europa League.

The club sold out an allocation of 2,000 tickets for the match within 20 minutes, having offered them to season-ticket holders on a first-come-first-served basis.

Fans are due to return to the Premier League at the weekend, firstly at the match between West Ham and Manchester United on Saturday.