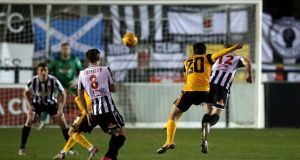 The lowest-ranked side remaining in this season’s FA Cup can certainly say they exited with their heads held high. A wonder strike from Portuguese midfielder Vitinha ultimately booked Wolves’ place in the fifth round of the competition and a tie against either Southampton or Arsenal, but not before a spirited effort from National League North side Chorley pushed their Premier League counterparts to their limit on a bitterly cold night in Lancashire.

Chorley, in the fourth round of the cup for the first time in their history after victories against three league sides already, and having not faced top-flight opposition in competitive football since 1900, looked set for a straightforward exit from the competition after 12 minutes, when Vitinha’s long-range strike put Wolves into an early lead. But much to their credit, the non-league side battled to the very end.

In fact, they could perhaps count themselves unfortunate not to have taken Wolves to at least extra-time, with a number of genuine chances coming their way on a night when, all things considered, they more than held their own against Nuno Espírito Santo’s side, who continue to look out of form in front of goal despite progressing here, with neither Patrick Cutrone or Fabio Silva looking threatening all evening.

Nuno signalled Wolves’ intent from the off. While his starting line-up featured six changes, including starts for John Ruddy and Cutrone, there were still five full internationals in his side against a team 121 places below them on the pyramid. Among that quintet was João Moutinho who, as a winner of a major international tournament less than five years ago, would have been forgiven for needing a moment to take in his surroundings at Victory Park.

Chorley gave Wolves little time to adjust to the occasion, though. Within two minutes, Elliot Newby forced Ruddy into a smart save, and the hosts’ spirit in pressing their opponents was commendable, it was matched at the other end by tight, compact defending.

And while Wolves could not find a way through the Chorley backline, they did manage to break the deadlock thanks to a marvellous strike from Vitinha, whose bending shot from almost 35 yards out gave Matt Urwin no chance in the Chorley goal. However the non-league side did not wilt after going behind.

Instead, they kept pressing and showing their intent, much to the delight of the local supporters who had clambered on to the pylons and grass verges around the stadium to grasp any view of their big night they could. Arlen Birch’s deliveries were giving the Wolves back three plenty of problems, as was the presence of Matt Cardwell up front.

And after the Chorley striker once again made a nuisance of himself inside the area with the hosts pressing again, Willem Tomlinson flashed a shot wide of Ruddy’s goal. It could even be argued that for patches of the first half, it was Chorley who looked the better side.

But on the stroke of half-time, there was another warning sign as to Wolves’ firepower. Chorley’s organisation had kept them firmly in the cup tie, but when they gave the ball cheaply on the edge of their own area, Cutrone fired narrowly over Urwin’s crossbar.

Half-time would not stunt Chorley’s momentum or enthusiasm, though. Just like in the first half, they started the second the better of the two sides, with Connor Hall’s glancing header saved by Ruddy minutes after the restart. Hall then volleyed another testing ball into the Wolves box over the bar, and in truth, there only looked like one side likely to score at that point in proceedings.

That feeling only grew as the hour mark approached, as the hosts’ best chance fell to defender Andy Halls, who forced a magnificent reaction save from Ruddy to keep the Premier League side ahead.

Chorley’s pressing forced Nuno into changes too, with three more internationals – Pedro Neto, Rúben Neves and Adama Traoré – sent on to finish the cup tie. They were, however, powerless to prevent more Chorley chances, as the hosts continued to come forward with gusto.

But ultimately, that glorious opportunity for Halls was the best either side mustered, as Wolves held on to progress: but only just.

With the National League North suspended for at least two more weeks, Chorley may face an extended break until their next game. But they will head into that break knowing that here, for one night only, they pushed top-flight opposition every step of the way. – Guardian