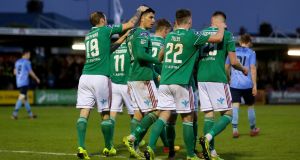 A spectacular equalising goal by Pat’s defender, Lee Desmond, proved to be the main highlight of this draw at the Brandywell Stadium.

Letting fly with a shot from close to 40 yards on the half hour, the defender’s shot screamed into the top corner of the Derry City net.

In fact, it was a game of few chances after Derry had started so well but failed to build on their opening goal in the ninth minute.

Having kept faith with the side which held Dundalk at Oriel Park last week, Declan Devine’s hopes of a second win over the men from Inchicore failed to materialise.

Visiting keeper Brendan Clarke was tested by Greg Sloggett after five minutes, Clarke getting down well to save the low effort.

But the deadlock was deservedly broken four minutes later following a superb counter-attack by the home side.

Full back Ciaran Coll gained possession on the left and having played a neat exchange with Junior Ogedi-Uzokwe, his low cross was swept home by the advancing Barry McNamee, giving Clarke no chance from 16 yards.

However, Derry seemed to lose their way somewhat allowing Pat’s get a foothold in the vital midfield area and they battled their way back into the game.

Indeed, Pat’s deservedly restored parity on the half hour with what was a sensational strike by Desmond.

That said, Harry Kenny’s men appeared to be content to settle for a share of the spoils after the break, refusing to force too many players forward.

Derry threatened in the 58th minute when Junior rose well to meet a Stokes cross but he failed to hit the target.

A dangerous cross by Simon Madden threatened the Derry defence in the 85th minute, centre-half Eoin Toal opting to head the ball over his byline at the expense of a corner.

Cork City moved up to seventh place in the Premier Division table and earned a second straight win under interim manager John Cotter as they saw off UCD at Turner’s Cross.

City began well before and had the lead inside five minutes. From a James Tilley free kick on the right, Seán McLoughlin and Conor McCarthy both got their heads to the ball, allowing captain Karl Sheppard a straightforward finish from close range for his first goal of the season.

That settled them and McLoughlin and Graham Cummins both went close after that. While playing nice football, UCD were restricted to two long-range shots from captain Gary O’Neill early on. However, just after the half-hour they almost levelled as Jason McClelland had an effort cleared off the line by Conor McCormack following a corner.

After that chance, City finished the half well and McLoughlin nearly made it 2-0 following a corner as half-time neared while Dáire O’Connor fired wide against his old club.

Early in the second half, UCD had renewed impetus and Conor Davis shot over before they came even closer to an equaliser. From an O’Neill free kick, Liam Scales kept play alive and his defensive parnter Josh Collins had a shot which came back off the crossbar.

It proved to be a turning point as City were 2-0 ahead on 53, Kevin O’Connor the provider with a low cross to allow Cummins a near-post finish.

Tilley and Sheppard both had shots from distance in the wake of that as City controlled the game without going gung-ho for a third, however they still had to be wary of the UCD threat, with Davis having a punt from outside the area and a deflection almost steering it in.

That was as close as they came to knocking City out of their stride though and as the end neared a third home goal looked likelier.