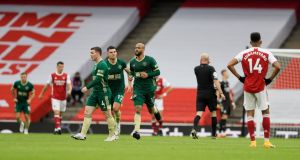 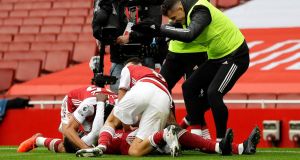 Over the coming 24 hours it will be tempting to cast the £72m Arsenal spent on Nicolas Pépé as a millstone, given the increasing likelihood that they will not be able to afford their primary transfer targets in this window. That is not an unreasonable view but Pépé added crucial value to Mikel Arteta’s side here, emerging from the bench with a hitherto dire game goalless and effectively ensuring it was won within six minutes. Pépé was involved in Bukayo Saka’s opener and then ran through to score a fine second, before a late David McGoldrick strike gave Sheffield United brief hope of their first point.

Ultimately Arsenal deserved the win, although it did nothing to dissuade anyone from the idea they must add drive and fluidity to their midfield. Unless Houssem Aouar, Thomas Partey or another of comparable calibre can somehow be landed by Monday night there will be more tough, attritional afternoons like this.

The state of an excruciating first half was summed up by the fact it took 28 minutes for either side to conjure a goal attempt. When one arrived it was not exactly worth the wait, Eddie Nketiah flicking an ambitious header that offered catching practice for Aaron Ramsdale. Nketiah had been given his first league start of the season and Arteta, seeking a more expansive approach, had opted for a 4-3-3 ahead of his standard back three. But none of it offered much to quicken the pulse on a murky, dank afternoon whose air had been faintly dispiriting at the outset.

On days like this, when the football is scrappy and the conditions inclement, the absence of supporters is felt even more keenly than on those balmy summer evenings when everything at least bore some novelty. A crowd would have added some spit and snarl to proceedings here, particularly when Sander Berge was fortunate only to be booked for a heavy challenge on Pierre-Emerick Aubameyang six minutes before half-time. They might also have cajoled a little more urgency from Arsenal, whose problems moving the ball quickly were again painfully evident.

Their most incisive moments, such as they were, came down the left flank through combinations between Kieran Tierney and Saka. Both are proper, capable footballers but few of their peers operated with brightness to match. When Arsenal did come close to scoring in the 37th minute they were gifted the chance, Ramsdale passing the ball straight to Dani Ceballos. He quickly found Aubameyang, who attempted to catch the backpedalling keeper out with an early shot from 25 yards. Ramsdale thwarted him with the merest of fingertips and, although Aubameyang would also attempt extend him with a scissor kick shortly afterwards, that was the extent of any excitement.

The away side had come to make life difficult and succeeded, without offering much threat themselves. They had a grievance of their own in the fifth minute, though, when David Luiz appeared to pull back Oliver Burke in attempting to remedy his own mistake. Lee Mason saw no wrongdoing; Chris Wilder chuntered on the sidelines but could be happy enough with the way his players proceeded to set about their task.

Ceballos showed signs of smarter thinking early in the second period, whisking in a first-time pass that Aubameyang could not quite reach. It was not the precursor to a sea change though and Arteta soon called upon the more direct running of Pepe in Nketiah’s stead. The switch meant Aubameyang, too often required to busy himself in situations of little consequence on the left, was afforded the chance to influence matters from a central position.

He wasted little time. When slick buildup between Pepe and Mohamed Elneny found Aubameyang just inside the area, he clipped a deft ball through to the onrushing Hector Bellerín. The right-back’s cross was perfect and the ever-alert Saka nodded in at the far post.

The move was evidence of what Arsenal can do when their wavelengths coincide. More quickly followed. Bellerín was again the creator, finding Pepe in full stride on the right, although there was still plenty of work to complete. Enda Stevens could not keep up with the Ivorian and, with John Egan backing off as he entered the area, he had time and space to slot a fine slide-rule finish in off Ramsdale’s far post.

That seemed to be that because, doughty as United had been, there had never been a serious suggestion they could open Arsenal up. The game reverted to its previous drift but Arsenal are not yet good enough to permit that and, after some modest pressure, McGoldrick cut inside to beat Bernd Leno with a peach of a left-footer from 20 yards. The same player blazed wide in added time but Arsenal hung on and will now hope the market does them some favours. - Guardian