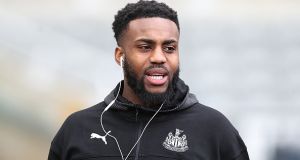 Danny Rose has spoken about his depression, racist abuse, and a return to play. Photograph: Getty Images

England and Tottenham defender Danny Rose has again criticised the level of punishment countries receive for racist abuse, describing it as “b******s”.

In a Instagram Live with musician Don E, the left-back, who is currently on loan at Newcastle, also said he would try and “write someone off” if racism occurred when his side were losing a match.

It was just one of a number of issues that the notoriously outspoken Rose talked freely about, as well as the prospect of a Premier League resumption where he admitted: “I don’t give a f*** about the nation’s morale, people’s lives are at risk. Football shouldn’t even be spoken about until the numbers have dropped massively ... I listened to the announcement yesterday, no football until June 1st or something, I don’t even pay attention to any of that.”

Rose has spoken out before about the racist abuse he received when playing for England in Montenegro last March, when he and several team-mates were subjected to monkey chants.

The Montenegro FA received a €20,000 fine and was ordered to play a game behind closed doors and Rose says not enough is being done.

“Is walking off teaching them a lesson? If you walk off it’s nothing,” he said.

“They are getting fined £10,000. It’s b******s. The FA when it happened they were brilliant, they couldn’t have done anymore. But the higher powers of course they can do more. It is just one of those things.

On how he would react if he received abuse again, he added: “(I’m like) Whatever. If I was losing 2-0 or 3-0 and I heard it, I would try and write someone off, I am not going to lie. If I am winning you just get on with it.”

Rose also touched further on the depression he suffered prior to the 2018 World Cup, admitting that a serious knee injury which put the brakes on a protracted big-money move sparked his illness.

“I was doing well in 2016/17 and I maybe had a chance of leaving and I got injured and it killed me,” he said. “Kyle Walker left, which he deserved to and I am over the moon for him, but part of me wished that was me.

“That was the start of it. I got a bad injury, I was out for nine months and then my uncle committed suicide so that was one part. It was a slippery cycle but I am fine now, that was a couple of years ago.”

There were more light-hearted moments during the interview, revealing how former Spurs boss Mauricio Pochettino gave him a strict message before coming up against Lionel Messi and admitting he wanted to give up football after being nutmegged in training.

“Poch told me in the hotel before the game I was playing and he said, ‘No matter what you do don’t kick Messi, don’t make him angry. If he gets angry we will lose’,” he said.

“I’m thinking, ‘No, you can’t be telling me this’. I normally sleep in the afternoon, so I went back to my room and I just laid on my bed thinking, ‘What the f*** am I supposed to do tonight’.

“Luckily he didn’t play and then he came on with 15 minutes to go and I am thinking, ‘Don’t foul him, don’t foul him’.”

In his early days at Spurs, Rose was sulking after Harry Redknapp failed to bring him on as a sub and his mood got worse afterwards.

“On the Monday we were back in training and my head was still gone,” Rose admitted.

“Then I got nutmegged in training and all the lads started busting up and I was thinking, ‘I can’t have this’.

“We were doing finishing after that and I have hit one wide and I have gone to collect a ball and I have seen my car and I thought, ‘F*** this I am going home’.

“So I got in my car in my boots and everything and I drove home. I called my mum and said I don’t want to play football anymore. I was 18 or 19. I spoke to her, I was emotional and she calmed me down.”