Darragh MacAnthony: ‘Football is a trillion-dollar industry. It can’t die, we can’t let it die' 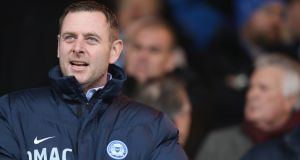 Darragh MacAnthony: “Football is a trillion-dollar industry. It can’t die, we can’t let it die. Raising £170 million should be a piece of cake.” Photograph: Mark Thompson/Getty Images

The horsemen are circling and for Leagues One and Two the apocalypse is nigh. For Darragh MacAnthony, the owner of Peterborough, the day of reckoning will come in July or August, when payments deferred during football’s pause can be put off no longer. VAT and PAYE will have to be settled; suppliers and, for some clubs, players and members of staff will need their money.

Everyone is trying to imagine how things will look and function when the Covid-19 pandemic eases and the predictions have been bleak, particularly for tiers three and four in England. The Championship, too, faces uncertain times. There is a grim acceptance in some quarters that clubs will go to the wall.

At League One and Two level, matches behind closed doors feel like a no-win situation, with the logistical costs to get them on surely outweighing the revenues generated.

Could clubs expect to raise enough money from streaming deals for online viewers? Like everybody, MacAnthony has heard the talk that the season will be called off – even if he does not want it to be – and ghost games without supporters will be a feature for much of the next campaign.

But MacAnthony is a doer rather than a man to simply throw up his hands and wail. This is a time for action and, if preventative steps are taken, he believes the English Football League can “rescue the situation and come out of it stronger without losing clubs”.

The straight-talking Dubliner outlines his survival blueprint with liberal use of the f-word. To him, the practice of factoring holds the key. Factoring is essentially a type of loan system, whereby money contractually due in years to come can be advanced for the payment of a penalty or fee. The borrower then adjusts his or her business plan in the years that follow to save the money and repay the loan.

The EFL is in the first of a five-year broadcast deal with Sky worth £595 million (€680 million) and what MacAnthony suggests is that the governing body brings forward the bulk of the monies due in years four and five in exchange for paying a penalty to the broadcaster of, say, 10 per cent. It could be sold to Sky as a discount on the contract.

MacAnthony says Peterborough will need about £1.6 million (€1.8 million) “come August time to pay all the bills that have been deferred” during the shutdown and he would like the EFL to create a relief fund of about £170 million (€190 million) to bail out clubs in the Championship, League One and League Two who have short-term cash-flow problems.

The EFL could have someone in charge of the fund who would make the payments to creditors on behalf of the clubs so unscrupulous owners could not exploit it.

Furthermore, any club that drew down on the fund would pay interest – “maybe 8 per cent,” says MacAnthony – and they would return the money in instalments over the following seasons. This would be given back to Sky and, by the end of year five, everybody would be square.

“All we’ve got to do is factor an amount of money,” MacAnthony says. “We’ve got contracts for years to come and we should be able to advance that money, build a fund, protect the clubs and get through all of this. I’m not asking for government money. I’m asking us to use our financial brains, to factor money on a business that is successful world wide.

“Football is a trillion-dollar industry. It can’t die, we can’t let it die. Raising £170 million should be a piece of cake. If the Football League can’t get that kind of advanced money from Sky or even the Premier League, then go to some of the private owners of clubs who are worth £3 billion or £4 billion and ask them if they want to earn 8 per cent on their money every year. They will put it up and they’ll probably get a knighthood for services to football, as well.”

MacAnthony would have stipulations for clubs that use the fund; a new set of rules for a new financial order. He says a strict salary cap based on turnover to reduce wage bills would be a prerequisite together with a cut in squad size to 23 players. There would also be an “agents’ treaty”, under which players pay the 5 per cent agents’ fees rather than having clubs build them into deals.

MacAnthony knows things have to change, including the financing of player loans from Premier League and Championship clubs to those further down. He says League One and Two clubs are sometimes asked to pay 100 per cent of the player’s wages and for 11 months rather than the nine of the season, with accommodation costs on top.

“We are paying wages we shouldn’t be paying to improve other people’s players, to give them game time that they are not getting,” MacAnthony says.

“It’s fundamentally and morally wrong. We have to stick together and say: ‘League Two clubs pay £750-a-week maximum, League One up to £1,250. That’s it. Nine months. Enough of loan fees, too. And if the Premier League and Championship don’t like it, and say ‘we’re not going to loan any players for a year’. Let’s see how they like it when they can’t get their teenagers out playing and they have assets that are depreciating.”

Finally, MacAnthony would like to see the appointment of a “football tsar” to control a £20 million portion of the £170 million relief fund. The person would be able to step in and run clubs that are close to going out of business, drawing on this money, rather than have firms of administrators do so.

“The tsar would run the club for three to six months until a buyer is found and, when that happens, the fund is replenished,” MacAnthony says. “This would save clubs from being run badly and going out of business.” - Guardian