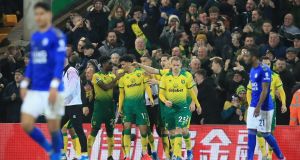 The Northern Ireland international had not scored for the Canaries since January 2018, but he cleverly fired past goalkeeper Kasper Schmeichel to give his side the lead with 70 minutes gone.

Leicester did have the ball in the net through Kelechi Iheanacho’s second-half effort, only for it to be ruled out on VAR review for handball by the Foxes forward.

“I think the lads were brilliant today,” Farke said.

“We are playing here in the best league in the world against one of the top sides in the league so it says a lot about the quality of Leicester, but then to be there with such a spirited and committed performance with a deserved win and clean sheet.

“It’s amazing and we just have so many compliments for the lads today.

“I’m unbelievably delighted for Jamal because he had a tough first season in the Premier League. He had to adapt to the level and then was out for 10 or 11 weeks.

“It was a top-class assist from Max Aarons and then Jamal was able to do some magic with his left foot.”

Brendan Rodgers’ Leicester were without top goalscorer Jamie Vardy, who was ruled out just before the game with a calf problem, and the visitors were unable to find the net in his absence, and have now gone five games without a win in all competitions.

The Foxes manager admitted he was disappointed with the loss but said Vardy should return soon.

“(I’m) disappointed to lose the game, didn’t think we deserved to lose it,” Rodgers said.

“We are obviously disappointed with the goal that was disallowed. Both players unintentionally handball but worse case scenario for us it’s a free kick for us.

“We have no complaints, we arrived into the final third of the pitch with 19 attempts on goals, but didn’t quite have that little bit of precision and quality that we’ve had for much of the season.”

When asked about the injury to the club’s leading goalscorer, Rodgers said: “He’s not out for long, a low grade strain on the calf.

“He’ll be back in, if not for Burnley, for the game against Aston Villa.”