Meanwhile, Derry were comfortable against Bohs while Cork picked up a vital three points 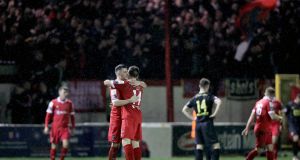 On a bittersweet night for the 19-year-old, however, he had to be helped from the field late on with a leg injury.

The victory marked Shelbourne’s first over St Pat’s in the league since 2006 when the Drumcondra side won the title prior to their financial implosion.

Shelbourne survived some early pressure to play their way into the game to punish negligent defending to take a deserved lead on 23 minutes for what would prove the only goal of the game.

Kabia was left completely unmarked to score with a downward header from Karl Sheppard’s corner with goalkeeper Brendan Clarke rooted to the spot.

In a tight, full-blooded derby, St Pat’s pinned their hosts back before the interval with Billy King bringing a smart save at the foot of a post from Jack Brady in the final minute of the half.

St Pat’s dominated possession from the resumption as they chased the game.

Brady had to do well again on the hour mark to gather a Chris Forrester shot at the second attempt following a Jason McClelland corner.

St Pat’s hopes of getting back into it suffered a setback on 70 minutes when right-back Rory Feely, booked in the first half, received a harsh second yellow card and was sent off for what appeared an accidental trip on Aaron Dobbs.

The Shelbourne striker was then inches from stretching their lead as he saw his looping header from Sheppard’s cross bounce over off the crossbar.

Derry City gained their first win of the season, ending their poor run against Bohemians over recent years.

And it was debutante, Stephen Mallon,who brought the Brandywell to life during in his first start of the season.

On loan from Sheffield United, the winger netted a stunning strike in the 68th minute to secure Derry’s first win of the new season.

And Derry made sure of the win during injury time when subs, Walter Figueira, was set up by Adam Liddle in a counter-attack and the former Waterford player took full advantage of a one-on-one situation.

A determined Derry opened brightly and they dominated the first half scoring chances with Jamie McDonagh particularly prominent in the forward forays by the home side.

However, on the stroke of half time, Bohemians could so easily have broken the deadlock.

Danny Mandroiu gained possession during a Derry break and he cut the ball back into the path of JJ Lunney but the midfielder’s effort was directed well wide of the target and the home lot breathed a sigh of relief.

Controversy abounded nine minutes into the second half when Keith Ward lofted the ball over Derry keeper, Peter Cherrie, and as the Bohs player turned and began to celebrate, Danny Lupano got back to whip the ball off the goalline and the visitors were far from happy.

Derry, however, brought Bohs back to earth in the 68th minute when Mallon, given his first start since arriving at the Brandywell, netted a sensational solo effort.

Having taken possession in midfield, the Sheffield United loanee cruised past three Bohs players and having entered the penalty area he drove a ferocious effort high into the top corner of the net giving McGuinness no chance.

That goal appeared to take the sting out of Bohs’ enthusiasm as the big Brandywell crowd drove Derry City on.

As the game drew to a close Derry made sure of their first win when, following a break from defence, substitutes Adam Liddle and Walter Figueira combined with the latter taking full advance of a one-on-one situation with McGuinness.

Alec Byrne’s 55th-minute header was the only goal as Cork City got off the mark for the season at Turner’s Cross.

The hosts had been second-best for much of the first half and looked to have fallen behind when Alex Kogler bundled an effort home in injury time when Liam Bossin couldn’t hold Ruairí Harkin’s shot. However, after initially awarding the goal, referee Neil Doyle changed his mind, with Bossin having to depart on a stretcher.

City were a lot better in the second half, with Deshane Dalling twice going close before Byrne headed home a Dylan McGlade corner. Kogler and David Webster had chances for equalisers but City held out.