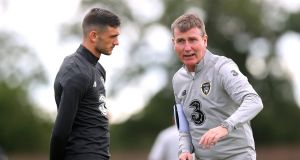 The first few reports into just what really was going on at the FAI when its directors weren’t paying attention to how John Delaney was running the place should be out over the coming months. Sadly, none seems likely to provide a forensic analysis of the process that produced the great man’s managerial succession plan.

The board, all being fans, must have had opinions about it; delaying Giovanni Trapattoni’s departure by the best part of a year seems, after all, to have been one of the few occasions on which they asserted their authority over their former chief executive (although perhaps he gave it to them as a little something to indulge them. A reward to not being more hung up about the organisation’s dramatically deteriorating financial situation).

The scheme that involves Mick McCarthy moving on no matter how successful he is, Stephen Kenny taking over regardless of how his stint with the under-21s goes and Robbie Keane having a role across both reigns despite neither manager having had a hand in hiring him is, however, generally said to have been 100 per cent Delaney.

The inevitable tensions it has generated are never far beneath the surface, it seems, and bubbled up to it again on Tuesday evening as McCarthy spoke about being in the firing line with the first team while Kenny was being “protected” ahead of the proposed takeover date, just short of a year from now.

There is a strong suggestion that the 60-year-old will be pretty well looked after if and when he does make way but it is clear every time that he talks about the arrangement that he is not happy about it.

There were always a couple of ways in which the approach of the actual transition might have generated renewed scrutiny of how clever all of this really was and the factor common to just about all of them was a significant revival in the senior team’s fortunes under McCarthy.

With three group games and the probability of Nations League play-offs (if needed) to go, the team is still in with a pretty good shout of progressing. Manage that then do half way well at the finals and whoever the new CEO is in Abbotstown may find themselves wondering just why it is he should feel bound to show a coach with a proven ability to generate some much needed cash the door.

Things would be more straightforward, of course, if the under-21s weren’t shaping up to have perhaps their best ever campaign, playing possibly their best ever football with a team containing several outstanding players being encouraged at every turn to achieve their potential by a hugely progressive coach.

The performance and result in Sweden alone would have marked Kenny out as a strong contender to manage the senior team at some stage in the future were there not already a calendar somewhere with his big day marked on it.

In the meantime, everyone is trying to carry on as though the situation is normal. McCarthy said after the Bulgaria game on Tuesday that he had sent Kenny a text congratulating him and the Dubliner said after his side’s victory over Armenia last Friday that the senior team manager has been consistently good to deal with.

The months ahead will be interesting, though. Having seen Josh Cullen, James Collins and even Jack Byrne – who McCarthy suggested still needs to prove himself as a higher level – establish themselves as more credible options on Tuesday evening, McCarthy said that the likes of Troy Parrott, Aaron Connolly and Jayson Molumby will be left with the under-21s unless they suddenly start to make great strides at club level.

To judge by the game in Kalmar, that leaves Kenny with all that he needs to keep Ireland on course for a first ever appearance at an under-21 finals (we will know more after next month’s visit by Italy), a tournament he would not, going by the succession plan, be able to coach at himself because he will have already taken over the seniors.

Asked if might do it anyway, he kicked for touch, describing it as, “quite unlikely a scenario”. He also says that there have been no discussions about his backroom team while Keane contends that the FAI wants him to stay on and McCarthy would clearly rather fancy doing the same.

There is, of course, little arguing with the way the respective teams are going right now so maybe, for the moment, we should sit back and hope for the best. As things stand, nobody has suggested that the whole thing will not pan out precisely as planned and yet, for all respectful nods between the participants, it is hard to completely shake the feeling that there may well be trouble ahead.