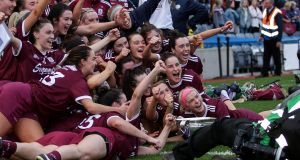 “Thank you, come again!” You have all heard Simpsons character Apu Nahasapeemapetilon in your head, right? While that catchphrase has become synonymous with Apu and The Simpsons, it has also become a rally cry when it comes to supporting women in sport.

Manchester City goalkeeper Ellie Roebuck had 15 seconds to come up with something quick and snappy when a member of City’s social media team gave her an iPhone to record a quick message. She uttered the usual City fans “Manchester is blue” cry, and followed with a simple message: “Hopefully you can come and support us over at the academy stadium in future matches.”

Roebuck’s to-do list was pretty much complete: win a derby game against newly-promoted rivals Manchester United, produce some heroics during the game and ask that all fans continue their record-breaking support in what is now tipped to be a ground-breaking year for women in sport.

You see 31,213 fans had turned up see the Manchester derby kick off the Women’s Super League (WSL). Not only that, 31,213 paid to go see two women’s football teams.

Now I usually wouldn’t express delight and excitement about someone paying for a ticket, but in a time where debates about paying versus giving tickets away for either nothing or close to nothing, this was a massive win for those who, like myself, believe women in sport isn’t a free tagline, and there should be some form of payment to see your World Cup heroes.

And, bizarrely, the 31,213 fans that showed up were not let down when they realised the stadium was a third empty – there was a joyous and celebratory atmosphere throughout the ground.

Down south Chelsea and Tottenham were playing in Stamford Bridge, and Chelsea took a completely different approach. Tickets were free, local retailers were dotted around the ground selling half-scarves, and a carnival atmosphere was building...dare I say, a proper football atmosphere.

Some 24,564 fans turned up, free of charge, and created an unforgettable atmosphere in the cauldron of Stamford Bridge. There was some disappointment, however, as Chelsea claimed over 40,000 tickets were distributed, and during the attendance the announcement did not announce an exact figure . . . just under 25,000.

It was not just the big clubs turning up – there were 3,000 in Bristol and about 1,500 in Liverpool. And at the newly-built Johan Cruyff Stadium in Barcelona there were more than 5,000 to see the hosts beat Tacón (future Real Madrid) 9-1.

With the BBC reporting that the number of fans attending across all 110 WSL games last season was around 92,000, ironically the first weekend alone has brought in well over half of last season’s attendances.

And to look further within, the Camogie Association should be applauded for its ambitious predictions in July. It had predicted that it would break its long-standing record in a stand-alone camogie fixture of 24,567 (Cork v Tipperary, 2004).

Last weekend it did just that, and pushed 24,730 through the turnstiles of Croke Park to watch three thrilling games. Context is critical, Kerry, who won the junior title, have only one adult camogie club, so their following wouldn’t be relied upon to break records. And the carnival atmosphere resonated on the television, which is something women’s sports are often critiqued for.

Kerry need an excuse to push for growth within the county, while Westmeath had to go up a standard after rocketing onto the scene in their junior final in 2017. And Galway, well, the media needed an underdog story that would hook people, and we certainly got that.

So what does all this mean?

While players from Niamh Kilkenny to Roebuck to managers like Emma Hayes to Casey Stoney to Johnny Greville all expressed delight at the success of the weekend, Apu could have been used to pop up with his thank you, come again!

The milestone reached over the weekend isn’t exactly the end result – it is a framework and precedent to what could and will be achieved.

Context is key, and judging a sport on weekly merits isn’t helpful. Using random figures to justify either argument over whether women in sport is or isn’t valuable, isn’t healthy for anybody. Women in sport are crying out for a consistency it has never seen before.

The ladies football finals are on this Sunday in Croke Park, and while those figures could smash a lot of numbers mentioned in this article, it is now time to push growth and consistency for 2020.

Milestone and remarkable figures are significant for end-of-year records, but it is not the end destination. The end destination is when you can get healthy attendance numbers at a decent paying price in grounds that can serve up an atmosphere like no other.