Five of the most crucial Manchester derbies in history 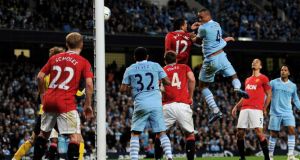 In a season that finished with Everton winning the title, both Manchester clubs were mired in relegation trouble and met at Maine Road for a derby that could scarcely have had more at stake for the 52,424 present. City, a goal up and looking good for the win, conceded a needless equaliser when Dave Wagstaffe’s backpass was intercepted by Denis Law, prompting the goalkeeper, Harry Dowd, to bring the United forward to ground in the penalty area. Albert Quixall scored from the spot, earning United a point that helped them stay up, while City ended up two places below them and were relegated. United went on to win that season’s FA Cup, their first major trophy since the Munich air disaster five years previously. City remained in the Second Division for three years until they were marched out as champions by Joe Mercer.

Almost six months after the famous Manchester derby in which Law all but relegated his former club United, the clubs met again in the third round of the League Cup. City travelled to Old Trafford as strong favourites but came a cropper at the hands of a United side heading for a quick return to the top flight. United’s victory, secured by a Gerry Daly penalty that possibly should not have been awarded, marked the first-team debut of the 17-year-old Scottish left-back Arthur Albiston, who would go on to make almost 500 appearances for the club. There have been more important Manchester derbies but this one mattered a great deal to United fans in so far as it was a signal of strong intent. Richard Kurt, author of The Red Army Years, would later describe the occasion “as the greatest, most unbelievably exciting atmosphere I’ve ever seen Old Trafford generate”.

There have been more memorable derby wins for United but this was right up there in terms of importance. Chasing Kevin Keegan’s runaway leaders Newcastle, Alex Ferguson were desperate for all three points against neighbours desperate to avoid relegation. City, trailing 2-1 in the 74th minute, looked to have rescued a point when the substitute Uwe Rösler fired past Peter Schmeichel from the edge of the area, only for Ryan Giggs to break City hearts four minutes later with an even more venomous strike that City’s much-maligned German goalkeeper Eike Immel got a hand to but couldn’t keep out. United went on to capitalise on Newcastle’s infamous collapse and win the title by four points, their celebrations further buoyed by City’s relegation on goal difference. United’s victory heralded the start of City’s darkest period, the nadir of which came two years later when they were relegated to the third tier.

With a place in the Cup final against Bolton or Stoke up for grabs, supporters of both Manchester clubs could have been forgiven for presuming that victory in this semi-final was all but a guarantee of a major trophy. United, on course for an unprecedented fourth Double, were thwarted by a composed finish from Yaya Touré, who capitalised on an error by Michael Carrick before slotting past Edwin van der Sar. Dimitar Berbatov, in for Wayne Rooney, had missed two glorious opportunities to give United the lead. The final whistle prompted ugly scenes, with Rio Ferdinand and other United players involved in an angry confrontation with City’s Mario Balotelli. It later emerged that a post-match hole had been kicked in the wall of United’s Wembley dressing room. It was repaired in time for the final, in which Touré struck again, against Stoke, to win City’s first major trophy since 1976.

City had trailed United by eight points three weeks previously but Vincent Kompany’s header in the first-half knockings was enough to secure the win that sent the noisy neighbours clear on goal difference with two matches of the Premier League campaign remaining. It was the fourth of six straight victories for Roberto Mancini’s side, who subsequently beat Newcastle before wrapping up the first title of their brave new petro-dollar-fuelled dawn in the most dramatic circumstances imaginable against Queens Park Rangers. Wins against Swansea and Sunderland in their final two games were no consolation for United, whose manager, Sir Alex Ferguson, was left ashen-faced at the Stadium of Light upon learning of a last-gasp Sergio Agüero winner 137 miles south-west that won City the title on goal difference. It could be argued they actually won it a fortnight earlier. – Guardian service

1 America at Large: Golfers guilty of legitimising Trump’s toxic regime
2 Ireland, France or England? Who needs what to win the 2020 Six Nations
3 Solskjær’s stock is on the rise again after clever squad rotation
4 ‘This is not a personality contest’ - Jack Nicklaus endorses Donald Trump
5 Gael Fickou shifted to the wing as France name their XV
Real news has value SUBSCRIBE