Chelsea rescue a draw at Bournemouth to stay fourth 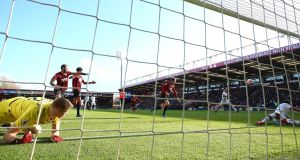 This was hardly the emphatic response Frank Lampard had hoped for but Marcos Alonso rescued a point for Chelsea on their return to action at Bournemouth. Chelsea, bruised from a night of torment against Bayern Munich in midweek, fell behind to goals from Jefferson Lerma and Joshua King in three remarkable second-half minutes but Alonso ensured Chelsea did not leave empty handed. Chelsea have been depleted by injuries of late, with Tammy Abraham limping out of the warm-down on Tuesday, but Alonso struck twice to help hold on to fourth spot for another week at least.

Lampard did not attempt to sugarcoat a humbling defeat on Tuesday and, in the opening stages here, they were again exposed, particularly in wide areas after staying faithful to a three-man defence incorporating wing-backs. Ryan Fraser released the overlapping Bournemouth full-back Jack Stacey, who cut the ball back for Philip Billing. It was an inviting cross but Billing, languid in style, lacked conviction and toe-poked the ball straight at Willy Caballero, who was again preferred to Kepa Arrizabalaga in the Chelsea goal. Billing had a chance to make amends seconds later when Fikayo Tomori, who was withdrawn an hour into his first league start since December, failed to control a loose ball. Billing sensed an air of vulnerability and seized possession but hammered a left-footed effort into the side netting.

As it happened that wing-back system provided a platform for Chelsea to build on when Alonso opened the scoring, but its pitfalls were laid bare when Billing slipped in Stacey, who rampaged into the 18-yard box and slid a wonderful ball across goal. It eluded Callum Wilson’s outstretched left boot but not King, who was on hand to tap in at the back post and double Bournemouth’s advantage after Lerma towered above Mateo Kovacic to head in an equaliser from Fraser’s corner.

Then, a week on from having two goals chalked off in defeat at Turf Moor, came another agonising VAR check, with the referee Andre Marriner waiting for the video assistant referee Paul Tierney’s verdict back at Stockley Park. King was ruled onside, Marriner threw the ball towards the centre circle and Bournemouth had stung Chelsea.

Chelsea, who had controlled large spells, were suddenly pegged back, with Andreas Christensen crudely chopping down Wilson as Bournemouth surged upfield on the counterattack. Lampard introduced Ross Barkley – dropped from the defeat in midweek alongside Antonio Rudiger – and Willian off the bench, and Michy Batshuayi soon followed in place of Giroud.

Barkley replaced Jorginho, who will serve a two-match suspension after picking up a booking here. Batshuayi had the ball in the net less than a minute after entering, shooting beyond Aaron Ramsdale after latching on to an Alonso pass, but the striker was rightly flagged offside. Then the Chelsea captain César Azpilicueta thrashed the ball wide as panic ensued in the Bournemouth box. But they eventually found a way through when Azpilicueta picked out Pedro, who forced a superb right-handed save from Ramsdale, only for the rebound to drop kindly for Alonso, who headed in the leveler.