‘He’s worked extremely hard at goalkeeping since he was 14, to improve all aspects’ 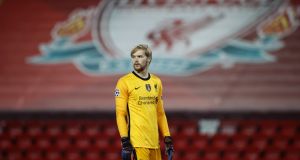 As Ringmahon Rangers Under-14 striker Caoimhín Kelleher prepared to take on Corinthian Boys early in the 2011-12 season, little did he know that his future would be decided by a chance discussion on the sideline that day.

When Stephen Bermingham, who has an impressive track record as a coach, bumped into Kelleher’s mother Jacqueline, he set in motion a chain of events that led to the now-22-year-old starting a game for Liverpool in the Champions League against Ajax last Tuesday night, keeping a clean sheet in the process.

“I met his mother at Corinthians Park and I asked if he’d ever try playing in goal,” Bermingham said. “I’d have coached Fiacre, his older brother [now with Wrexham] and I was aware of his other brothers, who are great sportspeople.

“She said that he might give it a go so we worked with him as part of the FAI’s Emerging Talent Programme for a number of weeks. He was getting better and better and then, when Ringmahon needed a goalkeeper, his late father Ray rang me and asked if I thought he was ready.

Because he was a striker himself, he was able to anticipate what a striker was going to do

“I said I felt he was but, obviously, given how good he was outfield, Ringmahon were concerned that he might be a loss there but his manager Eddie Harrington was excellent with him and he got better and better.

“He was actually still on the Cork squad as an outfielder and they let him go but I was speaking to the coaches there and I told them that they’d have him back as a goalkeeper. They were kind of shocked but they did end up calling him up again!

“His attitude, his commitment, determination, athleticism, everything - you could see his calmness against Ajax, he was like that from the minute he became a goalkeeper.”

Having made the move back the field, Kelleher’s progress was swift. From the start, Bermingham sensed that there were strong raw materials to work with.

“Because he was a very good outfielder, he has that strong distribution,” he said.

“That was a great starting point and he was just so calm and relaxed. He always took in the information - you’d say something to him once and he’d get it.

“That was probably why it was a bit easier to coach him from scratch, because he had no bad habits. That was in October, he started for Cork in the Kennedy Cup in June and he was on the Irish international development squad in July. The family all have a great work ethic and huge focus and they were great components to have before he’d even started.”

Having had trials with Aston Villa, Kelleher was recommended to Manchester City by their scout in Cork but no move was made. When he impressed with Ireland, another City scout wondered why he wasn’t on their radar but by then, it was too late as Liverpool had pounced.

Seán Fitzgerald, the secretary of Ringmahon, wasn’t surprised that the former outfield player advanced at such a rate.

“Because he was a striker himself, he was able to anticipate what a striker was going to do,” he said.

“He had no fear, either - a ball would bounce in the six-yard box and he’d pounce on it. You just knew straightaway that he was one of these naturally gifted fellas.”

He hasn’t forgotten his roots, either.

“Like any former player who’d come down, he throws in his €2 if it’s a senior game and he’s just one of the lads, there’s no airs or graces about him,” Fitzgerald said.

“A few small kids might want a photo or a picture and he’s a great role model that way. Last year, Axa, who sponsor Liverpool’s training gear, were down with us doing a video and I got the jersey he had had for the Club World Cup final against Flamengo from his mother. I brought it down to show the kids and they were afraid to touch it.

“It’s brilliant for those kids to look up to guys like that and to want to be the next Caoimhín Kelleher or Alan Browne or Adam O’Reilly [both with Preston North End].

“That’s all down to the coaches, the volunteers going down two nights a week for training and a match at the weekend.”

And, while he received widespread praise after Tuesday, Bermingham doesn’t expect it to go to his head.

“He’s confident and he trusts his ability,” he said. “Against Ajax, you could see it, being able to have the confidence to kick with his weaker foot over an attacking player on the big stage shows that.

“Obviously, Jürgen Klopp rates him very highly because he has seen the qualities that Caoimhín has shown over the years and he’s well-deserving of the praise he’s getting but he’ll stay grounded.

“He has worked extremely hard at goalkeeping since he was 14, to improve all aspects of his game.”