Burnley strike late to consign champions Leicester to another defeat 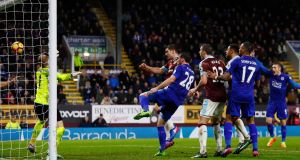 Vokes fired in from close range in the 87th minute to secure the Clarets’ seventh successive win at Turf Moor in all competitions and fifth in the league, although replays suggested he may have controlled the ball with his arm before shooting.

Referee Mike Dean, who had earlier waved away notable penalty appeals from both sides, allowed the effort to stand despite the strong protests of Leicester’s players.

Crystal Palace secured their first Premier League win under Sam Allardyce with a 2-0 victory over Bournemouth on Tuesday night.

Both sides struggled in the first half as the rain came down at the Vitality Stadium but the visitors needed less than a minute after half-time to take the lead through Scott Dann.

Bournemouth had the majority of the possession in the second half but Palace doubled their lead in injury time through Christian Benteke.

The result means Bournemouth have failed to win a game in January and Eddie Howe made three changes from the side which drew 2-2 with Watford on January 21st.

Bournemouth have conceded at least two goals in six of their last seven home league fixtures as they slip to 14th in the table while Palace remain two points behind 17th-placed Swansea, who beat Southampton.

Middlesbrough’s winless run in the Premier League continued although they claimed what could be a crucial point in their fight for survival with a 1-1 draw against West Brom at a wet and windy Riverside.

Boro, who had collected just two points from their last five top-flight matches prior to this fixture, fell behind when their former midfielder James Morrison lashed home from 20 yards early on.

But in an entertaining opening half they drew level when Gareth McAuley needlessly brought down Martin de Roon in the area and Alvaro Negredo slotted home the resulting penalty, which proved to be the end of the scoring.

Both sides had chances to go ahead in a more sedate second half as Matt Phillips and Salomon Rondon struck opposite posts in quick succession while De Roon’s first-time effort drew a fine save from Baggies goalkeeper Ben Foster.

A point may soothe the mood of Boro boss Aitor Karanka, who on Monday admitted his frustrations at failing to sufficiently add to his squad in the January transfer window, with targets Robert Snodgrass and Jese Rodriguez moving elsewhere.

However, Crystal Palace’s win at Bournemouth means they are now only two points clear of the drop zone.

Swansea recorded back-to-back wins for the first time this season as Gylfi Sigurdsson’s strike saw them beat Southampton 2-1 and claim a crucial victory at the Liberty Stadium.

The home side had led through a deflected Alfie Mawson header seven minutes before the break, but were pegged back by Shane Long’s near-post effort just before the hour mark.

But up popped Sigurdsson with 20 minutes to go to score his seventh league goal of the season — a second winner in 10 days after his strike against Liverpool at Anfield — and boost the Welsh club’s Premier League survival hopes.