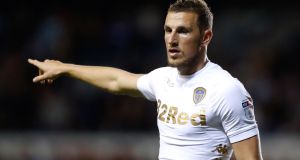 Burnley have announced the signing of Chris Wood from Leeds on a four-year deal for a club-record fee.

The New Zealand striker rose to prominence by finishing as the Championship’s leading scorer with 27 goals last season and will now get his chance to shine in the top flight under Sean Dyche.

“My ambition has been to play in the Premier League for years,” Wood told Clarets Player HD.

The Clarets did not disclose the sum paid to Leeds for Wood but confirmed it was more than their previous record, reportedly around £13million for Robbie Brady from Norwich earlier this year.

They secure a frontman who had played for seven Championship clubs before settling at Leeds, where he followed up his 13-goal haul in 2015/16 with an explosive tally in the last campaign.

SIGNING: Burnley Football Club is delighted to confirm the signing of Chris Wood from Leeds United for a club record fee.
More to come... pic.twitter.com/hYgQ6fOHnF

He picked up where he left off by scoring in Leeds’ opening game of the season at Bolton but ruled himself out of last weekend’s win at Sunderland after declaring “I didn’t feel it was right to play” amid speculation about his future.

The 25-year-old, who has had brief spells in the Premier League with West Brom and Leicester, will be available for Burnley’s Carabao Cup second-round tie against Blackburn on Wednesday.

He said: “This is a club that wants to stay in the Premier League for years to come and it’s going that way.

“I’ve had tastes of being in there but I’ve never had the chance to give it a proper bash.

“Coming here I feel I’ve got a proper opportunity to do that. I’ve never started a Premier League game and this what I want to do.

“The squad has done fantastically over the last couple of years to put themselves in the position they are now.

“There have been some great additions this summer, which I’m sure has given everyone an added boost, to move forward and cement us as a Premier League team and looking on further up the league.”

Wood, who has scored 20 times in 52 appearances for New Zealand, added: “The manager has given me a lot of confidence and backed me to bring me here, which is what you want.

“I’ve still got a lot of good years ahead of me. I’ve got lots of ambitions to achieve in the future. I’ve got goals and dreams that I want to achieve and it starts here.”

Dundalk boss Giovagnoli takes his share of blame for not shaking things up earlier 21:03
Arsenal complete Rapid turnaround to take three points in Vienna 20:53
Molde turn up the heat in the second half to dim the lights on Dundalk 21:04
Disappointment and frustration par for the courses as golf goes into lockdown 18:59
Keldermann claims the lead in Giro d’Italia 18:57

1 Level 5 golf shutdown: Ireland one of few countries to close courses
2 Ken Early: Like Napoleon, Mourinho is the outsider always trying to prove himself
3 Dan Martin toasting another stage win at the Vuelta
4 Shock at golf clubs as sport faces shutdown in Level 5
5 Philip Reid: Hard to find the sense in closing golf clubs
Real news has value SUBSCRIBE