A banner saying 'White Lives Matter Burnley' was flown over Etihad Stadium on Monday ahead of Manchester City’s 5-0 win over Burnley. Burnley have vowed to issue lifetime bans to those responsible for the offensive stunt. Video: Reuters 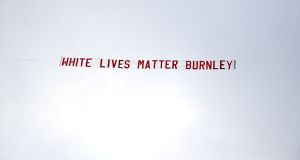 The banner flies over the Etihad ahead of Manchester City’s 5-0 win over Burnley. Photograph: Shaun Botterill/PA

Burnley’s captain, Ben Mee, said he felt ashamed and embarrassed of supporters who organised a banner displaying the words “White Lives Matter Burnley” to be flown over the Etihad Stadium on Monday. Burnley have vowed to issue lifetime bans to those responsible for the offensive stunt.

After the game, which ended in a comprehensive 5-0 victory for City, Mee delivered his own powerful condemnation. In an interview with Sky the defender said: “I’m ashamed and embarrassed that a small number of our fans have decided to put that around the stadium. There are a group of lads that are in there embarrassed to see that. It’s missed the whole point of what we’re trying to achieve and these people need to come into the 21st century and educate themselves as a lot of us do.

“It doesn’t represent what we’re about, what the club is about, what the players are about and what the majority of the fans are about. It’s a small minority of people and I’m really upset that it happened. As we were coming out we heard some whispers it was going to happen. The club tried to stop it.”

The Burnley manager, Sean Dyche, said: “I don’t think you can judge the whole club or town on that but it is unacceptable.”

Manchester City’s Pep Guardiola added: “Of course white lives matter but black lives matter too. Human beings matter. Everyone, we are the same. Every day we have to fight not just for this situation but for all the injustice around the world. It starts with the schools, for the new generations to understand we are equal and the education will save us.”

Fare, the European equality body that works with Uefa and Fifa, condemned the stunt. “The racist backlash against the Black Lives Matter movement across Europe is a trend we have seen and documented,” said Piara Powar, Fare’s executive director. “Set against the BLM message of equal rights ‘White Lives Matter’ can only be motivated by racism and a denial of equal rights. It shows exactly why the fight for equality is so important and why the majority of people have supported it.

The shameful episode detracted from an outstanding man of the match display from Phil Foden, who started and finished the rout that ensured Liverpool cannot win the title at home to Crystal Palace on Wednesday. “In the next decade to 15 years Phil will be an outstanding player for us,” Guardiola said. “I don’t have doubts.”

Guardiola said he expects Sergio Agüero to be sidelined for several weeks, and possibly for the remainder of the Premier League campaign, after aggravating a knee injury. The striker will discover the extent of his injury on Tuesday but Guardiola said: “It doesn’t look good for this season.” - Guardian