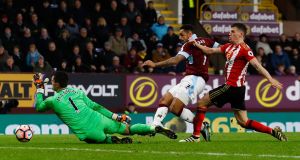 Sunderland endured another miserable night at Turf Moor as they were knocked out of the FA Cup following a 2-0 loss at Burnley.

The Clarets’ fifth successive victory in east Lancashire was earned through Sam Vokes’ first-half header and a second from substitute Andre Gray as they set up a home clash with Bristol City in the next round.

And they were barely troubled by their fellow Premier League side, beaten 4-1 at this venue on New Year’s Eve, as it took 88 minutes for George Honeyman to produce their first attempt on target shortly before they were booed off by the travelling support.

The third meeting in 18 days between these two sides saw a combined 10 changes made from the weekend Premier League XIs.

David Moyes had warned he would not risk the Black Cats’ Premier League status at the expense of a cup run yet he made just three changes, though top scorer Jermain Defoe was only on the bench, while his counterpart Sean Dyche made seven.

With the Clarets 10 points clear of the bottom three, the prospect of further FA Cup ties would surely be more attractive for Dyche’s men, who last made the fifth round in 2011.

And for all his alterations, this was a Clarets side brimming with confidence at a venue where Swansea, Arsenal and Manchester City are the only visitors to have won since December 2015.

There was a more possession-based focus about Burnley’s play, epitomised by the classy Steven Defour and the recently re-recruited Joey Barton, and Vito Mannone was kept busy, saving from Jeff Hendrick and George Boyd early on.

Barton, who scored the winner against Southampton on Saturday, nearly found the net again with a deflected effort from range that Mannone pushed away while the Sunderland stopper also had to push another Boyd attempt over the bar.

However, despite popping around passes in midfield, it was through a Vokes header on the stroke of half-time that they led as the Welshman got in front of Jason Denayer to guide a Tendayi Darikwa cross beyond Mannone and into the far corner.

Moyes’ side had not threatened Nick Pope’s goal, an issue they at least addressed shortly after the resumption with Sebastian Larsson curling a shot just over.

But it was still the hosts who looked more lively as Vokes was denied by a last-gasp Papy Djilobodji challenge and Boyd’s volley into the ground was claimed by Mannone.

Defoe’s introduction just after the hour suggested Moyes was not content with a meek exit, not that the 12-goal striker was able to ignite them.

Hendrick could have put the tie to bed with just over 15 minutes remaining but waited too long to slip in Jon Flanagan, who had strayed offside by the time the Irishman released the ball.

Burnley need not worry given Sunderland’s toothless attack and it was fittingly Gray who wrapped it up.

Eighteen days after scoring his first Premier League hat-trick, he finished off Boyd’s pass to beat Mannone once more with seven minutes remaining.

There was still time for Sunderland to finally trouble Pope, through Honeyman’s weak header, which brought ironic cheers, and Larsson’s free-kick, which had to be pushed around the post, but they were unable to provide a consolation, or stop the Black Cats fans directing their anger at Moyes and his team as they walked past.

National League side Sutton are also in the fourth round after they knocked out 10-man AFC Wimbledon with a 3-1 victory at The Cherry Red Record Stadium to set up a televised tie against Leeds.

Christian Benteke scored twice as Crystal Palace came from behind to beat Bolton 2-1 at Selhurst Park, which secured a date against Manchester City.

League One Bolton took the lead early in the second half when James Henry lashed the ball into the top corner.

Palace got themselves back into the tie after 68 minutes when Benteke headed home, before the Belgian frontman completed the turnaround with 13 minutes left.

Bristol City secured a fourth-round trip to Turf Moor when they knocked out Fleetwood after a 1-0 win at Highbury Stadium.

Jamie Paterson’s goal on 17 minutes proved enough to give the Championship side a first victory in nine games and also ended The Cod Army’s long unbeaten run at 13 matches.

1 Connell losing touch with the club championship is the real tragedy of Normal People
2 Ghosts and goalposts: The soul of street football in Dublin’s Gloucester Diamond
3 Rugby clubs in crisis: ‘I fear you may find a lot of players won’t go back playing at all’
4 Ian O’Riordan: Dreaming of one-way cycling over the Military Road
5 Coming fourth in the Olympics didn’t change this fearless quartet, time did
Real news has value SUBSCRIBE