Bournemouth and Callum Wilson punish Everton to take the points 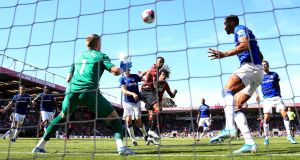 It is these kinds of off-colour and lukewarm performances that make it nigh on impossible to regard Everton as genuine top-six contenders.

Marco Silva overhauled his squad to the tune of more than £115 million this summer, undoubtedly bolstering his front line but his side’s defending here left a lot to be desired as Callum Wilson started and completed the scoring to earn Bournemouth a second win of the season.

Ryan Fraser regained the lead for the hosts after Dominic Calvert-Lewin’s equaliser, his first Premier League goal for 971 minutes, before Wilson seized on some lax defending to seal victory. For large periods, a passive Everton side flattered to deceive and Bournemouth duly punished them.

Other than Richarlison, Everton underwhelmed until things clicked on the brink of the interval. Bournemouth, though, gave them a helping hand. Séamus Coleman surged down the right flank unchallenged before slipping in Richarlison, who eased to the byline before standing up a cross for Calvert-Lewin to tower above a flat-footed Steve Cook and nod in. It was a soft equaliser that exposed Bournemouth’s brittleness in defence and a degree of naivety in a side with an average of 24 years and 195 days, Eddie Howe’s youngest starting line-up in a top-flight fixture.

Everton may have been off-colour but Richarlison had threatened before Wilson’s opener, smacking an effort against a right angle of Aaron Ramsdale’s goal from 25 yards after slinking away from Philip Billing, who twice flashed wide at the other end.

Howe opted to field Joshua King on the left wing, with Dominic Solanke and Wilson paired as a front two and Bournemouth’s abundance of pace caused havoc. It was the three of them that combined for a scruffy opener. It was a case of Wilson feeding off scraps in the box, alert enough to head in from close range after Solanke beat Richarlison to the ball to flick on Diego Rico’s corner at the front post. King, who selflessly plugged away throughout, swiped his left leg at it, helping the ball back across goal and Wilson, together with Nathan Aké, strained to guide it home.

Rico was unconvincing defensively, though, with the left back laying the ball on a plate for Calvert-Lewin to fire over before inviting Coleman to maraud forward in the build-up to the leveller. On the opposite flank Jack Stacey was kept busy, asked to tame Alex Iwobi and the excellent, overlapping Lucas Digne, on his Premier League debut.

The presence of Lewis Cook in the Bournemouth midfield after nine months out with a knee injury was a major boost for Howe, who dropped Fraser and Jefferson Lerma, who racked up more than 11,000 air miles with Colombia over the international break.

That did not stop Marco Silva fielding the midfielder’s countryman, Yerry Mina, or Richarlison, who played 170 minutes for Brazil. Lerma did enter as a late substitute for Cook, who was given a standing ovation on leaving the field, while Howe called on Fraser approaching the hour. After replacing Harry Wilson the winger immediately lured Digne into a foul that earned him a booking.

Ten minutes after coming on Fraser had the ball in Jordan Pickford’s net. Fraser’s right-footed free-kick – won by King after another explosive run – trickled past Pickford via Fabian Delph, who swiped his left leg at the ball. Five minutes later Bournemouth sealed the three points, with Wilson latching on to Rico’s pass and powering a shot beyond Pickford. – Guardian