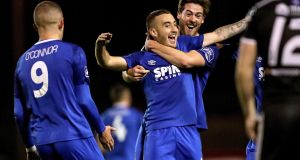 Tom Holland’s spectacular 84th-minute finish helped Waterford to get the better of an understrength Bohemians at Dalymount Park on Friday night.

The Blues had breathed a sigh of relief during the early exchanges, when Luke Wade-Slater’s close-range strike rattled the crossbar. Luck was not on the side of the Bohs winger and he subsequently suffered additional misfortune in the 12th minute.

After James Talbot saved a powerful Rory Feely header off a Georgie Poynton corner, the hapless Wade-Slater inadvertently bundled the loose ball into his own goal. Bohs controlled possession for the remaining of the opening period, but the woodwork came to their rescue for Walter Figueira’s goal-bound effort on 19 minutes.

Waterford continued to frustrate Bohs on the resumption and the Gypsies eventually looked to the bench for inspiration. Danny Grant entered the fray on 57 minutes and within seconds of his introduction, he provided the creative spark for an instinctive Ross Tierney equaliser.

This looked set to be the catalyst for a final-quarter surge by the hosts, only for Waterford to strike the decisive blow in the contest. Following Michael O’Connor’s elaborate back-heel into the penalty area, midfielder Holland unleashed an unstoppable left-footed shot into the roof of the net.

Three goals in 10 first-half minutes secured a northwest derby win for Sligo Rovers at the Showgrounds.

Niall Watson, Ronan Murray and Sam Warde got the goals as the FAI Cup semi-finalists proved too strong for neighbours Finn Harps in front of 1,685 spectators.

Harps boss Ollie Horgan was also sent to the stands on a bad night for the Donegal men, with relegation rivals Waterford and UCD both picking up points on the road.

Harps actually started well, but Watson’s headed goal on 21 minutes knocked them back, before Murray’s curling effort from the left three minutes later knocked them down.

And bad went to worse on the half-hour mark, as Warde’s corner from the left deceived everyone, and wound up in the net.

Harps stayed positive in the second half but had to wait until injury-time to really worry the home side, as substitute Tony McNamee slotted home from close range and Raff Cretaro hit the post.

UCD frustrated St Patrick’s on new manager Stephen O’Donnell’s first home game in charge to breath life into their own survival hopes with a big point at Richmond Park.

A chance was thus lost by the Inchicore side to overtake Derry City up into fourth place in the table as they failed to avenge their FAI Cup defeat at the UCD Bowl last month.

UCD ended a run of six straight league defeats, in which they’d conceded 30 goals, to move to within five points of second bottom Finn Harps.

Dean Clarke shooting narrowly wide five minutes in proved a false dawn for St Pat’s who, despite dominating the ball, struggled to create much else in the first half.

O’Donnell brought on Chris Forrester just past the hour mark to try to spark St Pat’s to life.

They thought he’d done just that minutes later, when threading Glen McAuley in on goal. But the flag went up for offside before he shot home.

UCD goalkeeper Conor Kearns saved at his left-hand post from Lee Desmond before making the stop of the night on 72 minutes.

This time McAuley was onside from Clarke’s through ball. But Kearns was out early to get down to save the low drive that lacked conviction.

UCD remained in the game with Jason McClelland’s surging run and shot deflected out for a corner four minutes later.

Yoyo Mahdy was then not too far off target with a drive from distance that whizzed past Barry Murphy’s right-hand post.

St Pat’s had one last chance on 81 minutes but substitute Gary Shaw’s header was saved on the line by Kearns.

And it was UCD who almost snatched victory at the death with substitute Sam Byrne rifling over the bar in stoppage time.