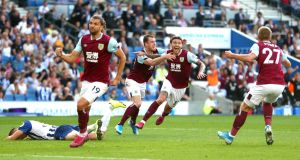 The fight against perception continues for Jeff Hendrick and Shane Duffy, even after the Burnley midfielder made his 100th Premier League appearance and the Brighton centre-back grew into his role in a new three-man defence when the sides met on Saturday.

The pair, close friends within the Republic of Ireland set-up, remained deep in conversation outside the home dressing room at the Amex Stadium well after the final whistle blew on their 1-1 draw.

Both had different reasons to be content. Hendrick more so, considering his sublime 90th-minute strike earned a point for the visitors and came after he had been sprung from the bench, where he has spent the majority of this campaign, in place of Aaron Lennon on the right wing.

The Dubliner created the goal from the heart of midfield, receiving a pass just inside his own half from Ashley Westwood, playing a neat through-pass under pressure for left winger Dwight McNeil and then cutting across the ball with his right foot after following up the move to get on the end of Matej Vydra’s deft lay-off on the edge of the box.

Hendrick was the instigator, confirming afterwards that he ushered both McNeil and Vydra further up the pitch to allow space prior to the move. He didn’t feel the need to celebrate by trying to make a point to his manager, Sean Dyche, about his lack of games this season.

Already this season Hendrick, a key figure in each of the last three top-flight campaigns, had no reservations about dropping down to the club’s under-23s in order to maintain a semblance of match sharpness. As a seasoned professional and established Premier League performer, he could have easily found a reason to wallow; instead he endeavoured to prove a point.

“For me it’s self-pride,” Hendrick said. “If you’re not in the team you just keep working hard and keep yourself going, because when you’re ready you’ve got to prove it . . . I’m not one to bang on managers’ doors. I do my talking in training, that’s the way it is.”

Dyche made sure to have a quiet word after Hendrick delivered on the pitch so he knew his efforts had been appreciated. “He said that it’s not gone unnoticed the way I’ve trained and all that, so that’s good to hear, that they have noticed I’ve been doing things right, so I just need to carry on.

“I was still working hard and still training the same way because you have to help the lads to prepare right as well, because at the end of the day we all want to do well in the league and stay in the league.

“That’s our bread and butter and then I had in the back of my mind the Ireland games, and they’re massive because we all want to make a major tournament again, so I was just trying to stay ready for that too.”

For Duffy, he accepts the need to adapt under new boss Graham Potter and believes it’s unfair that he is pegged as a one-dimensional centre-back. He was dropped for the 4-0 thumping at the hands of Manchester City prior to the international break and Chris Hughton’s replacement is trying to rewire how Brighton operate.

The stats bear this out: Duffy averaged 36 passes per game in the previous two campaigns, while in the four he has featured in so far this term that has risen to 49. “I know that I’m good enough to get on the ball, play out and drive into midfield,” Duffy said. “It’s just what people think of me. Because I probably do the other side so good, people think I can’t do the other side [with the ball] but I’m very comfortable with it.

“I can do both. I’m still adapting. It is completely different now than it was under Chris and with Ireland under Mick [McCarthy]. The more games I play the more I’ll get better.

“The competition for places is so strong. I’m going to have to keep my levels high and hope that it’s good enough to stay in the team.”

Another fight both Duffy and Hendrick will have to be ready for.