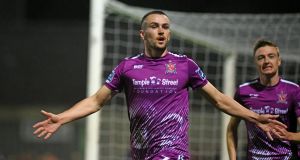 Dundalk secured the first silverware of the season at the Brandywell on Saturday evening, Vinny Perth’s men securing the EA Sports Cup in a sudden death penalty shoot-out at the Brandywell.

And the victory sees Dundalk on their way to replicating Derry City’s historic clean sweep of League of Ireland trophies back in 1989.

In what proved a thrilling final, the home side stunned the league champions when taking the lead on two occasions, but Dundalk’s experience saw them restore equality before the game moved into extra-time and penalties.

However, the sending-off of Derry midfielder, Grant Gillespie on the hour swung the game in Dundalk’s favour with Derry forced to defend.

Dundalk’s night was complete when the experienced Chris Shields secured the title in sudden death after Derry’s Ally Gilchrist smashed his spotkick against the crossbar.

For Vinny Perth, it was a deserved victory and a great night for his club.

“We enjoyed brilliant ‘away’ support which made it a wonderful night for the club, the owners, the players, the staff and the fans,” he said afterwards.

He continued to heap praise on his players, pointing to the heavy fixture list which follows success in all competitions.

“To achieve what the players have achieved after such a hectic schedule highlights the level of dedication they have. We have a very determined group and they have been outstanding over the past two months,” he added.

Reflecting on the game, he felt his side could have won during normal time.

“To be perfectly honest, our attacking play could have been better and we gave away two easily avoidable goals on the night.

“The sending-off saw the game swing back in our favour and we’re probably disappointed we didn’t win the game during normal time. That said, there’s no doubt that we dominated the possession and emerged the superior team at vital stages in the game,” concluded the Dundalk boss.

However, Derry moved back into the driving seat in the 50th minute when Junior Ogedi-Uzokwe’s tame shot was deflected into the net.

Gillespie was then dismissed having been shown a second yellow card by referee, Rob Hennessy, and Dundalk dominated the ball thereafter.

And they levelled matters in the 70th minute when Sean Gannon drove the ball home after Duffy’s shot had been parried by Peter Cherrie.

1 Conor McDonald: ‘People in fitness industry need to be careful what they put online’
2 My favourite sporting moment: Roscommon minors restore pride to a county
3 Germany well ahead of the curve as Bundesliga gears up for return to action
4 America at Large: Hurling fan Dowling leading the fight against Covid-19
5 Stephen Kenny: ‘I want people to come and look forward to watching this team’
Real news has value SUBSCRIBE
Crossword Get access to over 6,000 interactive crosswords