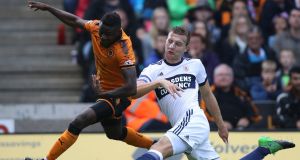 The Brazilian striker, signed on a season-long loan from Saudi Arabian club Al Hilal, capitalised on a defensive mistake from Daniel Ayala to net the only goal on 33 minutes.

Former Porto midfielder Ruben Neves – who reportedly cost Wolves €16.5 million this summer – also impressed on his first appearance as Boro failed to find a way back into the game.

Hull also struggled on their return to the Championship but Jarrod Bowen’s first goal for the club secured a 1-1 draw at Aston Villa.

Villa, captained by former Chelsea defender John Terry, made a bright start and were ahead after seven minutes through Gabby Agbonlahor. The Tigers roared back, though, and Bowen’s second-half volley ensured it would not be a losing start for new boss Leonid Slutsky.

An impressive pre-season saw Maguire score on his debut for the club and he almost repeated that feat in his league bow just before half-time.

The diminutive striker twisted and turned inside the area before firing in a shot that almost caught Keiren Westwood out at his near post.

Reid put the hosts ahead after 16 minutes before setting up Senegal striker Diedhiou, a club-record €5. 85 million signing from Angers, who headed home at the back post.

City midfielder Reid then added his second of the day from close range on the half-hour mark as the Robins ran riot in the first period.

Ryan Hedges pulled a goal back for Barnsley in added time but it was not enough to deny Bristol City boss Lee Johnson victory against his former club.

Billy Sharp picked up where he left off last season by scoring the only goal in Sheffield United’s 1-0 win over Brentford at Bramall Lane.

The striker netted 30 goals in League One last term and took just 39 minutes to open his account for the new campaign – the Blades’ first in the second tier for seven years.

Joe Garner also got off to the perfect start by scoring on his Ipswich debut in the 1-0 victory at home against Birmingham.

The former Rangers striker completed a counter-attack five minutes after half-time to seal three points for the Tractor Boys at Portman Road.

Conor Washington fared even better as he scored twice in QPR’s 2-0 win over 10-man Reading at Loftus Road.

The ex-Peterborough forward headed the hosts into the lead on 22 minutes and converted a penalty on the hour mark after Royals defender Tiago Ilori was sent off.

Elsewhere, Kenneth Zohore netted a late winner in Cardiff’s 1-0 triumph at Burton, while Fulham were the beneficiaries of a 25th-minute Russell Martin own goal but Nelson Oliveira stepped off the bench to earn a 1-1 draw for Norwich at Craven Cottage.