Aubameyang and Mkhitaryan on target as Arsenal stroll past Watford 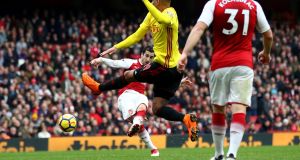 It was the game in between the games that matter for Arsenal and for long spells, there was a stuffed Sunday lunch feeling to it all. But it turned into something palatable for Arsène Wenger – a comfortable Emirates Stadium win, which was decorated by encouraging second-half flickers from the January signings Henrikh Mkhitaryan and Pierre-Emerick Aubameyang.

First, Mkhitaryan played in Aubameyang to make it 2-0 and, after Petr Cech had saved a penalty from the pantomime villain, Troy Deeney, Aubameyang played a pass inside the area for Mkhitaryan to finish for 3-0.

Arsenal’s focus has shifted from the Premier League to the Europa League, which has come to represent their only viable route into next season’s Champions League, and they are back here on Thursday night for the second leg of their last 16-tie against Milan. They are 2-0 up from last Thursday’s first leg.

Wenger’s team selection had reflected his shifting priorities. Laurent Koscielny and Aaron Ramsey were rested and Jack Wilshere and Calum Chambers used only as second-half substitutes. The latter replaced Shkodran Mustafi – the scorer of the opening goal – who limped off with an injury.

Deeney had infamously questioned the “cojones” of the Arsenal players last October, after Watford’s win over them at Vicorage Road, but he was the one to disappoint here. He put his head down and blasted the penalty only for Cech to stick up a firm hand and beat the ball away.

It helped Cech to his 200th Premier League clean sheet – a milestone that he has waited some time to bring up. The 199th had come in the 1-0 home win over Newcastle United on December 16th and this one ended the longest run of his career without one.

The Emirates was pockmarked by empty seats – a sign of the current dissatisfaction around the club – but Watford could not make the openings they fashioned in the first half count and they departed with a whimper.

Arsenal had begun at a fair old lick, snapping into challenges and passing the ball with zip, and they were value for their early lead. Mesut Özil stood a free-kick up into the box and it was a bad look for Watford that Mustafi was allowed to jump unchallenged and butt the ball back into the far corner. The Arsenal defender had eased into a glaring seam between Adrian Mariappa and José Holebas.

Watford were indebted to the goalkeeper, Orestis Karnezis, in the first-half. Twice, he made one-on-one blocks. The first had come in the first action, Özil having sprung Aubameyang clear while the second on 27 minutes followed a pass from Mohamed Elneny and an Özil burst away from Mariappa. Karnezis presented a big target on both occasions. Aubameyang also stretched for a Sead Kolasinac cross at the back post but he could not get there.

It was an open contest in front of a lethargic home crowd. Deeney tried to inject some feeling. When Özil felt a slight nibble to his ankle, rolled the ball out and sat down for treatment, the Watford captain fumed. Nobody else did.

Watford should have been level at the interval on the balance of chances.

With Koscielny, Héctor Bellerín and Nacho Monreal in the stands, there was a patched-up feel to the Arsenal back line and the nagging sense that a lapse lurked around the corner; that a ball in behind would expose them.

They were caught out in the 13th minute by a punt over the top for Richarlison and a lay-off from him to Abdoulaye Doucoure. The shooting chance opened up and it was a smart save from Cech that denied him.

Cech looked a little creaky and was not entirely convincing when asked to get down low with any degree of speed. He pawed out a Richarlison free-kick, possibly with the aid of his post, and it led to an inviting chance on the rebound for Roberto Pereyra. He blazed off target. Cech was also called upon to repel Richarlison’s firm header in first-half stoppage-time.

Aubameyang’s short Arsenal career has not been characterised by the work he has done away from the penalty box. He has been signed to spark inside the area and he did so just before the hour, following Mkhitaryan’s run and weighted pass. Aubameyang nipped in ahead of Karnezis to roll into the empty net. It was his third goal in six appearances for the club.

Watford knew it would not be their day when Cech denied Deeney – it was the goalkeeper’s first penalty save for Arsenal – and Mkhitaryan made the points safe shortly afterwards. Rob Holding had released Özil and when his cross was parried by Karnezis, Aubameyang picked out Mkhitaryan and his shot wriggled past the goalkeeper. – Guardian service