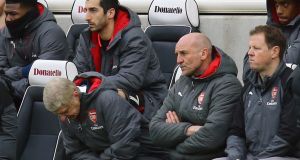 Arsenal manager Arsene Wenger during the defeat at the AMEX Stadium, Brighton, on Sunday. Photograph: PA

Arsene Wenger admitted Arsenal’s hopes of a top-four Premier League finish were over, after watching them lose 2-1 at Brighton & Hove Albion.

The club lag 13 points behind fourth-placed Tottenham Hotspur and the Europa League appears to have become their only shot at Champions League qualification. They face Milan in the last 16.

Wenger heard the travelling fans call for him to leave during a dismal first half at the Amex Stadium but he maintained he was the right man to revive the club’s faltering fortunes. This was a fourth successive defeat in all competitions - the first time the Frenchman has endured such a sequence since 2002.

“It is very difficult, nearly impossible now - we are too far behind,” Wenger said of Arsenal’s top-four prospects. “We have to be realistic. We need two teams to collapse and I don’t see that happening. We have to give our best for as long as we can and the Europa League becomes important.”

Petr Cech was at fault for both of the Brighton goals and the Czech tweeted an apology. “If you want to win a game away from home in the best league in the world, your goalkeeper can’t concede two goals like I did today,” he said. “It’s simply not possible. The team fought back but the damage was done.”

Arsenal had arrived at Brighton on the back of defeats against Manchester City in the Carabao Cup final last Sunday and the league on Thursday. “I can understand the frustration [of the supporters],” said Wenger. “What can I say? The League Cup in the middle of the season makes it difficult if you don’t win it. It brings a lot of negative waves.

“On top of that, the rearranged game on Thursday night [AGAINST CITY] didn’t help us to compete today. The negativity after losing the final, plus the fact we’re not in a fantastic position in the league, hits us hard. Am I still the right man? Yes, because I’ve done it before. I believe a quality of a manager is to try and shorten a crisis. I believe I can do that.”

1 Ireland v Scotland: Doris’ day as Caelan set for first cap
2 Ashleigh Barty now living up to all her earlier promise
3 Six Nations: Pundits, journalists and players have their say
4 Gary Lineker: ‘60 is just a number, 70 is the one to worry about’
5 The Offload: Doris, Kelleher and Cooney to give Ireland a new look
Real news has value SUBSCRIBE