Arsenal young guns turn up the heat to burn off Southampton 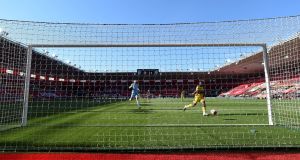 Arsenal’s Eddie Nketiah scores his side’s opening goal of the game with a tap in during the Premier League match against Southampton at St Mary’s. Photograph: Mike Hewitt/NMC Pool/PA Wire

In the blistering south-coast heat, Arsenal found themselves a shaft of light. It would be an understatement to say Mikel Arteta’s team needed this after a week of defeats, long-term injuries and pointed questions about their transfer policy.

Many of their old wounds have been self-inflicted but here they deserved the luck that had previously deserted them, Eddie Nketiah punishing Alex McCarthy’s embarrassing blunder midway through the first half and the substitute Joe Willock making sure late on. The second of those goals came after Southampton’s Jack Stephens was sent off but it did not flatter Arsenal, whose bid for the European spots remains alive.

The Southampton manager Ralph Hasenhüttl had initially predicted the “fitter team” would come out on top. It was not hard to see why: the temperature exceeded 30 degrees on an evening where conditions, as much as the now-customary echoing stands, emphasised the weirdness of playing top-flight football in mid-summer. Nobody would have been remiss in expecting an opening period played at walking pace but instead it set off with a spikiness that, in a roundabout way, brought Nketiah’s goal.

There is no escaping that it arose from a howler by McCarthy, who received a backpass from Jan Bednarek and had plenty of options as his team-mates fanned out. He chose to seek out Pierre-Emile Højbjerg, who had dropped deep, but appeared to underestimate the speed Nketiah was closing in and played the ball straight to the striker. It rolled towards the posts and Nketiah, who could smell the easiest goal of his young career, followed up to make sure.

It was a costly mistake, but also of a piece with the way proceedings had begun. Both sides emerged as if happy to put Hasenhüttl’s theory to the test, pressing willingly from the front and snapping at each other’s heels to the extent that Shkodran Mustafi was unfortunate to be the only player booked before half-time. Southampton opened with familiar vim, Danny Ings miscuing a volley when reasonably placed within a minute, but before long found themselves playing on the turn when Arsenal targeted their high defensive line.

The clearest example came in the 10th minute when a regulation ball up the left flank by Kieran Tierney sent Pierre-Emerick Aubameyang blazing off Stephens with such speed that, by the time he reached the corner of the six-yard box, the Saints centre back was left trailing 10 yards behind. Aubameyang seemed certain to adorn his 100th Arsenal appearance with a goal but McCarthy, with a piece of brilliance he would unfortunately soon cancel out, managed to flick his shot on to the bar.

As the pace slowed, Arsenal saw the half out in relative comfort. Granit Xhaka had replaced Matteo Guendouzi – who was Saturday’s miscreant at Brighton and dropped here, Arteta cryptically referencing “squad management” in one breath and an “internal issue” in the next – and the effect was of stability. They could have doubled their lead in added time when Nketiah, who had just come close to forcing a second McCarthy mistake, jabbed unconvincingly wide after bright work from Nicolas Pépé.

Kyle Walker-Peters and Shane Long were deployed for the second half in an effort to restore Southampton’s energy levels, the former quickly drawing a foul from Bukayo Saka. But the real incision continued to occur at the other end. Emiliano Martínez, deputising for the injured Bernd Leno, excited Arsenal’s coaches with the efficacy of his “side kick” when he arrived in London a decade ago. He showcased it here, kicking long and flat for Aubameyang to escape down the inside-left channel and slightly undercook a cross towards Nketiah, who would have tapped in his second had Bednarek not slid in.

James Ward-Prowse then blocked from Hector Bellerín and, with half an hour left, Southampton were labouring. They rediscovered enough crispness for Ings to volley over, while Martínez was briefly concerned by a Stuart Armstrong drive. The hitherto quiet Nathan Redmond came closer when, after Dani Ceballos had inadvertently diverted a Ward-Prowse cross his way, he drove into the side netting from deep inside the area.

There is always the risk this Arsenal side, serial squanderers of winning positions, will offer opponents a way back. Southampton were given their chance when Long, picked out marvellously by Stephens, got behind the defence and took aim after controlling on the run. But Martínez made a big one-handed save, subsequently dropping onto the ball, and his intervention proved decisive. Stephens was dismissed for fouling Aubameyang after Højbjerg had put him in trouble and, from the free-kick, Willock gobbled up a rebound to confirm Arsenal’s day in the sun. - Guardian

1 Waterford turn Kilkenny upside down and inside out
2 Jim McGuinness: There is a way to save championship and make it competitive
3 Waterford’s frenzied waves of attacks too much for Kilkenny
4 Ireland’s work-ons: Four things Andy Farrell needs to address
5 Sordid murder of hurling brothers still resonates in south Galway
Real news has value SUBSCRIBE