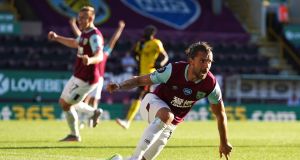 Jay Rodriguez’s 50th goal for Burnley was not only one of his best, it took his club past the 40-point barrier and left Watford worrying about their precarious position above the relegation places.

Nigel Pearson’s side looked good for at least a point here, particularly in a second half when they had Burnley on the back foot for long periods, but they were undone by a goal of genuine quality in a match that mostly lacked it.

Announcements, banners and perimeter advertising around the ground all combined to affirm that black lives do indeed matter in this part of the world, despite the events of the previous week.

The players all took the now traditional knee at the start, mercifully uninterrupted by distasteful fly-pasts on a balmy and cloudless evening in east Lancashire, though had supporters been present at the game there may well have been some sort of terrace protest against the Burnley board.

Sean Dyche feels he has been sold short by the club’s decision to allow several out of contract senior players to leave without either replacements or temporary extensions, and with a raft of injuries to deal with at present could only fill out his bench for this fixture by including two goalkeepers and a few inexperienced reserves.

A fairly dismal week for Burnley supporters in the wake of the 5-0 defeat at Manchester City was completed by frenzied speculation that Mark Hughes is favourite to take over should Dyche’s disenchantment lead to his departure, enough for someone in the streets outside the ground to make sure a “sack the board” message was sufficiently prominent to be seen.

Played in energy-sapping temperatures, the match was evenly contested without offering a great deal of excitement until the winning goal arrived. Rodriguez had the clearest chances of the opening quarter, bringing a fine early save from Ben Foster with his first effort, then putting a shot too close to the goalkeeper after good work in the area from Matej Vydra. Rodriguez had the option to square instead of shooting, and might have been better doing that, but having decided to go for glory he really needed to produce a more convincing shot.

Burnley’s twin strikers were both involved again midway through the first half in a passage of play that should have produced a goal. First Vydra hit a post having spotted Foster off his line, then from the rebound, with the goalkeeper still stranded, Rodriguez summoned both power and accuracy but saw Craig Dawson make a tremendous effort to block on the line.

Watford had started as if Troy Deeney or Danny Welbeck might cause the home defence a few problems, but gradually found themselves pushed back into their own half as Burnley continued to press forward from midfield.

The home side had the better of the first half in terms of possession and chances created, though Burnley also gave away enough fouls around the area to allow Tom Cleverley’s dead-ball accuracy to come into play.

It was a Cleverley corner that brought about Watford’s best opportunity of the first half, when Dawson headed just over from close to the penalty spot, though the former Manchester United player could not find colleagues quite as reliably from free-kicks. The crosses were always well-flighted, but most were too close to Nick Pope.

Cleverley failed to reappear for the second half, though Watford began with a greater determination to get forward, putting the home side under sustained pressure for the first time in the game. Not much came of it, apart from a wayward Will Hughes shot and James Tarkowski preventing Deeney reaching a cross from Ismaila Sarr, but it was the first indication that the visitors might be interested in more than a point.

Craig Cathcart might have done better when Pope made an unforced error and dropped a Hughes corner at his feet, though the substitute had his back to goal and after managing to turn could only come up with a shot that struck the now prostrate goalkeeper. Pope left his line and his area alertly to deal with a threatening break from Sarr 30 yards from goal, before Burnley had their biggest let-off, when Deeney reached an Etienne Capoue corner with a goalbound header, only to see Dwight McNeil on defensive duty by a post and able to clear off the line.

Watford were left regretting their inability to turn pressure into goals when Burnley hit back when they were least expecting it 17 minutes from the end. The home side had hardly troubled the Watford defence in the second half, yet when Josh Brownhill won possession in midfield and teed up McNeil for a cross from the left, Rodriguez appeared from nowhere to ghost in front of Dawson and glance the most delicate yet deliberate of headers past Foster.

Each contribution by Brownhill, McNeil and then Rodriguez was noteworthy in its own right, though Watford may consider they were suckered into playing too high upfield then hit on the break. There was a chance for Vydra to make it two before the end, but Foster was equal to his shot. – Guardian