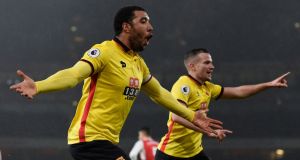 As he serves his touchline ban, Arsène Wenger has commented upon his improved vantage point from in the stands. The panoramic, according to the Arsenal manager, affords him a “better view of things” even if “you feel more powerless than usual”.

On a tumultuous night, when the rain tumbled down from the first whistle, Wenger watched his team’s Premier League title hopes suffer a body blow and the feeling left him numb. It was an occasion when Arsenal fans had one eye on Anfield, and the result of the league leaders, Chelsea, against Liverpool. But their team did not do its own job. They could not beat what was in front of them, after leaving themselves too much to do after a dismal first-half display.

Watford were brilliant before the break and they might have had more than the goals from Younès Kaboul and Troy Deeney to show for their superiority. They were supposed to be in a rut, having won only one of their previous 10 league fixtures. They did not play like it.

Arsenal recovered to advertise the comeback through Alex Iwobi’s goal during a blistering 15-minute spell in the second half. But Watford weathered the storm and, in truth, they held their hosts at arm’s length thereafter. The Arsenal substitute, Lucas Pérez, rattled the crossbar in the 85th minute but that was as close as his team came.

Watford had been two goals to the good inside 13 minutes and it was pinch-me time for their supporters. Indeed, after Kaboul’s 25-yard free-kick had deflected off Aaron Ramsey to wrong-foot Petr Cech for the opener, they questioned out loud Arsenal’s quality, given they were winning away.

As a former Tottenham player, who once scored the winner here in the north London derby, Kaboul could enjoy his goal that little bit more, even if there was an element of fortune to it after Tom Cleverley had rolled the free-kick short to him. The flick off Ramsey was decisive and it was just the start of a horrible evening for the Arsenal midfielder.

Ramsey was caught out for Watford’s second goal and, on 18 minutes, he felt a muscle in the back of his leg twang and he was forced off. Wenger was already without three central midfielders – Santi Cazorla through injury, Granit Xhaka to suspension and Mohamed Elneny because of Africa Cup of Nations duty. Alex Oxlade-Chamberlain came on to play alongside Francis Coquelin.

Watford’s second goal was all about the anticipation and turn of pace of another former Spur, Etienne Capoue. He was on to Ramsey in a flash to exploit his misjudgment on Gabriel Paulista’s poor throw-in to him on halfway and he streaked away, losing Coquelin with a nice stop-and-go move before surging around Shkodran Mustafi. Capoue’s shot hit Cech and it broke kindly for Deeney, who tapped home.

Arsenal were a shambles in the first-half – hesitant and loose, their game pockmarked by heavy touches and bad passes. Watford did not allow them to settle and they deserved credit for the way that they pressed them from their stride. Deeney was a snapping, muscular presence up front, Capoue was excellent while the debutant, M’Baye Niang, who is on loan from Milan, emerged with credit. Gabriel was booked for a 22nd minute lunge on him, which felt like a “Welcome to England” challenge. Niang, who worked off the left flank, kept on coming back for more.

Arsenal’s first-half desperation was summed up by Nacho Monreal’s dive in an attempt to win a penalty off Craig Cathcart – he was correctly booked – while it was Watford who had all of the chances. Cech tipped Sebastian Prödl’s looping header over the cross, after good work from Capoue while the goalkeeper was worked again by Daryl Janmaat, when a clear shooting chance had opened up for him. Arsenal, obviously, were booed off at the interval. They had offered nothing.

Arsenal had entered the game on a run of six wins and a draw in seven matches in all competitions – with the draw being the 3-3 at Bournemouth, when they were abject before staging an improbable comeback. Wenger’s team seems to have a ghoulish relish for making things difficult for themselves.

Wenger sent on Theo Walcott for the anonymous Olivier Giroud and, with Alexis Sánchez up front, they looked a different side upon the restart. The intensity was back and the home crowd rallied behind them. Watford’s defence, comprised entirely of centre-halves, were asked a simple question. Could they hang on?

The chances came at quite a rate early in the second half – two for Walcott, one of which Heurelho Gomes saved; one for Iwobi, which saw the goalkeeper shoot out an elastic arm to stop and one for Mesut Ozil, which also worked Gomes. Iwobi scored with a cushioned volley back into the far corner after dynamic work along the byline from Sánchez and a dinked cross.

Game on but Arsenal stalled. Watford put their bodies on the line and they knew that it would be their night when Pérez’s left-footed rocket from an angle on the right bounced back off the woodwork.