Midfielder was recently suspended after being charged with drink driving 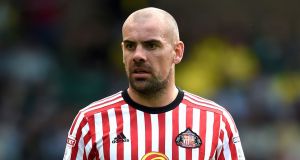 Darron Gibson has left Sunderland by mutual consent, having initially been suspended by the club after he was charged with drink driving, the Championship side have announced.

Gibson was initially arrested after several vehicles were damaged close to the club’s Academy of Light training ground on March 17 as his team-mates prepared for their Sky Bet Championship clash with Preston at the Stadium of Light.

Sunderland suspended the 30-year-old midfielder with immediate effect in order to carry out an investigation.

A club statement said: “Following the conclusion of his recent suspension, Darron Gibson will leave Sunderland AFC by mutual consent.”

The Republic of Ireland international joined the Black Cats in January 2017 but was unable to prevent their relegation from the Premier League last season and made the last of his 27 league appearances for the club in a New Year’s Day defeat to Barnsley.