Jose Mourinho full of the joys of spring after United win 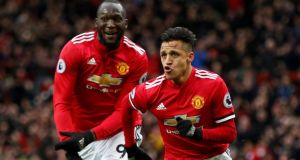 Jose Mourinho was in such good spirits after Manchester United beat Swansea that he invited counterpart Carlos Carvalhal into his post-match press conference.

Having temporarily been replaced in second place in the Premier League after Liverpool’s win at Crystal Palace, the Red Devils moved back into the spot they have maintained for most of the campaign thanks to a 2-0 win at Old Trafford.

Romelu Lukaku’s 100th Premier League goal after five minutes was complemented by Alexis Sanchez’s low strike in a superb first-half display that United were unable to maintain after the break.

David De Gea’s fine double save kept Swansea at bay after they belatedly jolted into life and Mourinho was feeling chipper after securing United’s return to second in the Premier League standings.

“The first half was perfect,” the United manager said. “Maybe one more goal and game over and the first half [would be] probably one of the best we played here.

“First half they didn’t cross the midfield line, didn’t have one shot. We pressed so high and strong, and then recovered the ball.

“We had lots of movement and passing. We arrived in many dangerous positions, we scored two, we should have scored at least one more.

“The second half was different. I think, first of all, credit to Carlos because he improved the team at half-time.

“But I think we let it go a bit, probably [because] six or seven players played international football midweek.

“I could feel the intensity went down. We let them have the ball, we didn’t press so high.

“Our transition when we lost the ball was slower, our passing was slower, our movement the same, so players with an amazing first half in the second half, they let it go down a little bit.

“And then they felt they had a chance. David had to make a couple of saves, but in this moment of the season, seven matches to go, points are gold.

“We got the points and are ready to fight stay in second position.”

Mourinho was in upbeat mood after the win, inviting friend Carvalhal into his press conference when he saw him outside the room.

“Come on, come on – give cakes to the guys,” Mourinho told the Swansea boss with a laugh, in reference to the Portuguese cake his compatriot handed out to reporters ahead of the game.

The United boss continued to speak alongside the Swansea boss, who eventually took to the main seat in the Old Trafford press conference room to explain he had no arguments about the outcome.

“It is so clear than Manchester United started to play very strong with high intensity.

“Our problem was it was difficult to control [Paul] Pogba and [Nemanja] Matic because they started to control the game with their two players. We can’t put pressure on them.

“And because we can’t put pressure on them, we play too much near our area and with the players that they have between the lines they create problems.”

1 Tipping Point: DeChambeau’s transformation raises questions, but who will ask them?
2 Pete Sampras: The forgotten great with the best serve in the business
3 Game Changers: Vincent O’Brien, a pioneer who took Irish racing to the world
4 Mental clarity in chaos: Novak Djokovic, the man who turned two into three
5 Super Rugby AU offers glimpse of rugby’s future if law changes are adopted
Real news has value SUBSCRIBE